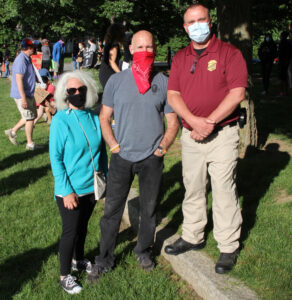 Hopkinton Police Chief Joseph Bennett says he hopes the community will continue to show support for him and his officers following the “disgusting and appalling” death of George Floyd while in police custody in Minnesota and the worldwide protests and vigils that have followed.

Bennett said he feels he has the backing of the town, speaking the day after joining a crowd of approximately 400 people at a Black Lives Matter protest at the Town Common on June 7.

“We all share that same message that what happened is disgusting and appalling and it breaks my heart that it’s shattering the trust that I and other members of the department have worked so hard to gain,” Bennett said. “I thought it was important for me to be out there and show that we stand with you.”

Police have faced tremendous scrutiny, including calls to defund departments, in the wake of Floyd’s death, the latest in a series of incidents involving alleged excessive force used by police against black people. On May 25, while being videotaped, then-Minneapolis police officer Derek Chauvin kept his knee pressed into Floyd’s neck despite Floyd’s cries that he could not breathe. Chauvin has been charged with second-degree murder, and three other since-fired officers who stood by during the incident also are facing charges.

“Eight minutes and 49 seconds? Really?” Bennett said, referring to the approximate time Chauvin knelt on Floyd’s neck. “And the fact that he was being videotaped and continued to do it. That group, I don’t know where their minds were. I can’t ever put myself in the position and I promise you, if that was me doing it, as the chief, one of my officers would have ripped me off of him. We would never stand by and let that happen.”

Chokeholds and similar tactics are not taught to Hopkinton police officers, Bennett said, and should be used in a manner similar to when an officer pulls a firearm: as a last resort when someone’s life is on the line.

In a statement released on June 4, Bennett called the incident an “appalling murder” and vowed to stand against “that injustice and all injustice” along with the community. He told the Independent that he would be looking within the ranks of the department and challenging himself and all officers to rid themselves of implicit biases. But he was quick to note that he is not happy with the lack of diversity within the department’s ranks.

“I have all white officers, and two, going on three, female officers, which we are proud of,” Bennett said, referring to a woman who currently is in the academy. “That’s out of 27 officers. It could be better, but in all honesty we don’t get a lot of minority applicants.”

The applicant pool has dwindled in recent years, Bennett said, with fewer than half of the number of individuals taking the civil service exam as when he first started. He feared that Floyd’s death and other deaths of unarmed black men and women at the hands of police could make it even harder to achieve racial diversity within the department.

“If this continues to erode the trust and faith in police, I could see us getting fewer minority applicants,” he said. “Interest in law enforcement is way down. It’s something we are working on.”

Defunding the police could also make recruiting more difficult, Bennett said, if it guts programs that provide social services and other roles that officers generally fill that are not strictly crime related. Stressing that he does not want the federal government dictating Hopkinton’s police policies, Bennett said it will ultimately be up to the community.

“I am proud of how we police in Hopkinton,” he said. “If the community decides to underfund or abolish or limit the role of the police to strictly a crime-fighting role, or whatever their model is, I guess we will have to try to adapt.”