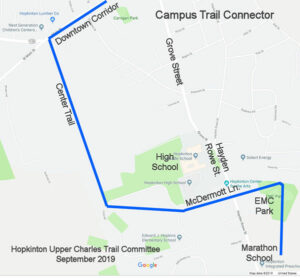 Members of the Upper Charles Trail Committee (UCTC) continue to make progress on the Campus Trail Connector initiative, a 2.5-mile path connecting Hopkinton High School, Hopkinton Middle School and Marathon Elementary School. When completed, the trail will permit students, parents, runners and other residents easy travel between the three schools and the downtown area. The initiative has been in the works for some time, but the UCTC is bringing it to fruition by taking it one step at a time.

“It’s a plan that has evolved,” said UCTC chair Jane Moran. “We saw this as a natural egress that’s part of our trail network.”

The trail network Moran is referring to actually began in 2014 when the Select Board formed the Upper Charles Trail Committee, whose members were charged with developing a multi-use, recreational path using the former Penn Central Railroad right of way. When complete, the hard surface trail will run continuously for more than six miles through parts of Milford and Hopkinton to the border of Ashland. 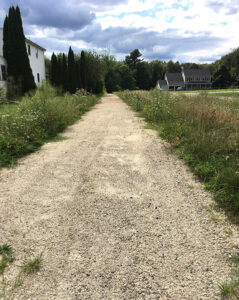 A section of the new trail already has been cleared and graded.

Although the Campus Trail Connector is a separate project, the committee anticipates it will eventually become part of the multi-community recreational path.

According to Moran, the School Committee has been supportive of the Campus Trail project, with a portion of it already cleared. And now the UCTC is hoping to take another step forward that will help defray costs associated with project.

“Only recently we heard about the MassTrails Grant,” said Moran, explaining the committee has applied for a grant from the MassTrails organization hoping to attain funds to help with engineering studies that need to be completed.

MassTrails is a program started by the administration of Gov. Charles Baker last year that provides matching grants to municipalities to help with trail and trail network initiatives. If the grant funding is awarded to the UCTC, Moran said the Mass TIP program could then provide additional funding to construct the trails.

Today, guidelines to construct new trails are very specific. They must be ADA complaint and have proper lighting and signage, among other standards.

Throughout the progression of the Campus Trail Connector, Moran said the committee has been “actively engaged with abutters,” keeping them abreast of the initiative.

She recently spoke during a Select Board meeting concerning its headway and provided updates on UCTC’s other projects.

On Wednesday, Oct. 2, the Upper Charles Trails Committee is holding a public meeting at the Hopkinton Public Library beginning at 6 p.m. The meeting is for residents to learn more about the Campus Trails Connector initiative as well as voice concerns and ask questions.

“We want as much input as possible. We want everyone to be comfortable with what we’re doing,” said Moran.

The committee chair encourages residents to visit uctc.hopkintonma.gov/campus-trail-connector to learn more about the project. The web page also allows residents to email questions to committee members.