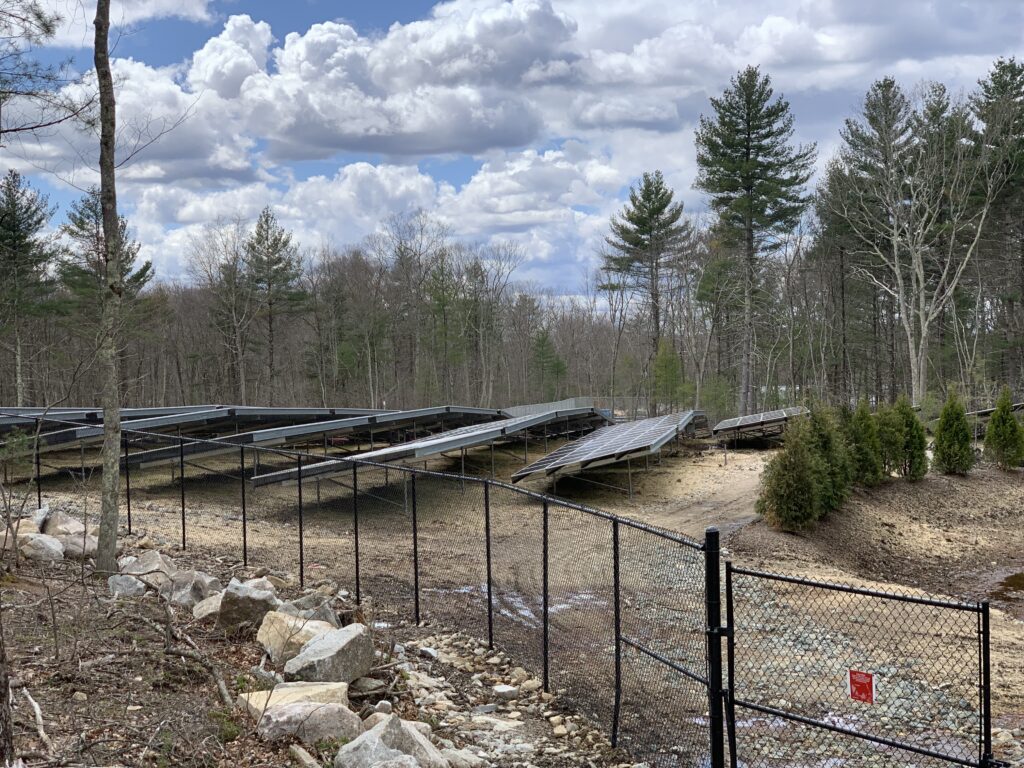 The solar development at 17 Wilson Street includes plantings designed to screen the array from neighbors. The Planning Board criticized the developer, Grasshopper Solar, for altering the screening plan and making it less efficient, while a Grasshopper spokesman indicated the work is not complete. PHOTO/JERRY SPAR

The Planning Board and neighbors of the recently installed commercial solar array at 17 Wilson Street expressed frustration with the developer’s screening implementation during Tuesday’s Planning Board meeting.

“What was installed [is] very different than what was approved,” Principal Planner John Gelcich said.

Gelcich said the screening in place consists of about 100 plants, and primarily arbor vitae, whereas the original plan was for far more plantings, including numerous native species. He added that the developer, Grasshopper Solar, did have some wiggle room, as topography alterations were expected to necessitate some changes. However, he said Grasshopper was supposed to submit an updated screening plan before proceeding.

Gelcich said he was invited to the site after the plantings were done, “very confused as to why they were done without the [updated] plan submitted. We’ve tried to work with them to figure out a way to mesh the plan that they had approved and this plan,” but Grasshopper has not shared enough details.

“They couldn’t give us an answer as to how many of each species were going to be located where,” Gelcich said. “Part of the [Planning Board] decision was they were going to give us a revised plan when they did know that information. They spoke to the neighbors … and these neighbors did their best to try to figure out what to do — but it wasn’t their responsibility to make that decision — but Grasshopper went and basically took that as an approval and installed [plantings].”

Contacted via email the following day, a Grasshopper spokesman said the company was not aware that the project was on the agenda for Tuesday, claimed all conditions of the town’s permit have been met, and indicated that the screening work is not complete and the map shown to Planning Board members was not meant to represent a final plan.

“We are transparent on what we intend to plant, and as such, we have provided this information openly to any stakeholder so that we can continue to meet the town requirements and receive feedback as to what is appropriate based on their requirements,” emailed Devesh Verma, the company’s marketing director.

Added Verma: “The current plan is still being worked on, and was not to be presented to the Planning Board. We are still working on the final screening with the neighbors and the principal planner.”

That undoubtedly comes as welcome news to the two immediate abutters, who both criticized the company at Tuesday’s meeting.

Neighbor Tom Shambo said he feels he’s been reasonable throughout the process but now is upset. Shambo pointed out that trees were cut down within the buffer zone that could have helped with screening. He also said Grasshopper workers moved boulders and placed them in the buffer zone, limiting what plantings can go there.

“Hold the developer accountable to what they had agreed to in the plans themselves,” he said.

“What has happened in the entryway and the view from the street is really a tragedy,” he said. “It’s hard to think of how they could have made it more ugly.”

Grasshopper previously was involved in a dispute with the Narragansett Indian Tribal Historic Preservation Office after a tribal representative indicated that artifacts sacred to the tribe’s culture at the site were destroyed by the company, which led to a cease and desist order last June. Grasshopper indicated — and Gelcich confirmed — that the sides eventually were able to come to an agreement that included avoiding further disturbance of a section of the property identified as culturally significant to the tribe.

Planning Board members discussed scheduling a site walk to see the area for themselves, and they expressed a desire to do what they can to withhold the occupancy permit so that the array cannot be activated. Eversource utility trucks were on site Wednesday installing an electrical connection under the street.

“This developer, it’s almost like a slap in the face, especially to the neighbors in that neighborhood who spent so much time and energy and thought into what would work,” Planning Board Member Jane Moran said. “And the plan was workable. And then to see this come, it’s really insulting.”

Added Vice Chair Mary Larson-Marlowe: “We spent countless hours on the original plan, and for us to spend countless hours again, going through tree by tree exactly what they have included and what they have not included is not the purpose here. They should be following what was approved, what the conditions were, and not substituting in things that were not approved.”

Devesh indicated a Grasshopper representative reached out to Gelcich on Wednesday to clarify matters. The issue is to be discussed at an upcoming meeting.