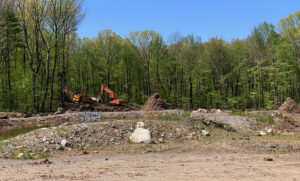 Work is well underway on the new lots between Chamberlain Street and Whalen Road. PHOTO/JERRY SPAR

The Conservation Commission debated a number of projects during a lengthy meeting on Tuesday night.

The meeting was shortened because a key project, the renovation of the Massachusetts Laborers Training Facility at 37 East St., had been removed from the agenda because the applicant requested a continuance beforehand. There were six notices of intent (NOI) filed for the project, which included work on the Conti and Crane buildings, the headquarters, dredging of the pond, utility work and restoration of the site. The hearings were continued until the next meeting on June 8.

Another large project under consideration was the Chamberlain Street/Whalen Road project. Lots 23, 25, 28, 29, 5 and 15 were approved pending slight modifications to the plans, including adjustments to the permanent immovable barriers (PIBs) and modifications to the backyards so they all conform to being at the 40-foot mark of the buffer zone. Some included trimming of side yards. Lots 4, 7, 11, 13 and 20 will be presented at the June 8 meeting.

The only two lots that were continued were Lots 1 and 2 because of the remaining issue of the long, circuitous driveway at the entrance of the property, which commission member Ted Barker-Hook estimated to be about 300 feet in length. The board had suggested at the previous meeting that part of the driveway on Lot 1 be shared with Lot 2 to shave off some of its length and impact. John Kucich, on behalf of the applicant, said that he did not believe that the shared driveway would work and that it “could result in a conflict between neighbors.”

The proposed development at Hayden Rowe Street and College Street came before the commission for reconsideration and was continued to June 8.

The project at 200 Wood St. was continued for a second time after a debate over the commission’s request to reduce the size of the proposed home and remove a two-car garage.

Matthew Watsky, attorney for the applicant, noted that the previous application had been denied because the groundwater testing had been done during a drought. The test recently was performed, and there now is a 3 1/2-foot elevation above groundwater planned, which helps with grading.

He added that there was “a significant amount of work” on other lots on the street within the buffer zone, while this has none outside the 50-foot buffer.

A question raised was that a two-car garage remained on the property after it was a concern previously.

“Our view is that having a two-car garage is better environmentally than a paved parking surface,” he said. He explained that the roof runoff would be clean water and enter the ground without re-treatment.

Environmental consultant Scott Goddard added that the wetlands on the property are only “marginally wet” and do not contain any habitat that is noteworthy.

Chair Jeff Barnes asked why a two-car garage and a four-bedroom house was necessary.

“It just seems to me, from my standpoint, that the scope of the project could be reduced,” he said, a comment that was echoed by several commission members.

Watsky said that seeking a waiver for the front yard setback where only 2,600 feet of work is under the committee’s jurisdiction “doesn’t quite meet the zoning act’s criteria for not granting the zoning variance. The regulatory question is not simply whether the commission has discretion to approve work within the buffer zone. But it has a requirement to act in a way that is consistent with the substantial evidence that is presented. You can’t just arbitrarily say, ‘It’s too much work.’”

Goddard said that the “commission’s criteria was seemingly ambiguous.”

Barnes responded that it was a “buffer zone encouragement issue.”

“What we approve sets a precedent,” he said. “We’re asking the applicant to minimize the scope of the project. I can’t be more specific than that.”

Meanwhile, the replacement of a septic system at 200 Wood St. caused some discussion but was approved with modifications by a 6-0 vote. Dan McIntyre represented the homeowner. The building had been subject to an order of condition issued by the commission in 2014 that recently expired, necessitating a new order to revise the septic design.

The owner hired an architect who determined the home would need new plumbing, McIntyre said. Before the septic tank would have been located within the 50-foot buffer zone. In the new plan, they would be moved to the front of the property, with some grading work in the 50-foot buffer.

The small garage near the barn is “beyond repair” and will be removed. The front of the garage, which at one time housed an antique shop, was overgrown. Some significant work to the foundation of the home will need to be performed.

One case of interest regarded the selective removal of invasive species on the Pratt Farm property on 110-112 Fruit St. A letter of response approving the request will be drafted, but no vote was taken. This required the commission to approve a request for exemptions to both the Massachusetts Wetlands Protection Act and the Hopkinton Wetlands Protection Bylaw. The town has been working on restoring the meadow there over the past two years, but several invasive species have encroached on the effort, including Asiatic bittersweet, glossy buckthorn and autumn olive in particular.

Chuck Dockey presented the application on behalf of town manager Norman Khumalo. He explained that there is the potential for a Community Supported Agriculture (CSA) farm in the area and the land is frequently used for walking. Two trails are approved for the site in near Whitehall Brook. Currently a path around part of the property that is mowed annually that loops through the meadow.

“The nature of autumn olive is that it reaches for the light,” he said. “It’s nasty stuff and it tends to encroach on the field.”

Dockey added that since the request was filed, one area of autumn olive “has stretched from its base well over 20 feet through the field from many seed sources.”

The proposal would be to pull or cut the invasive species from the perimeter of the field. This would be within 200 feet of Whitehall Brook or within 100 feet of bordering wetlands. Dockey said it would be considered an environmental improvement and the area would be maintained as part of the peripheral trail system.

Barnes questioned why the town manager and his office would be presenting the request. Dockey explained that the land could be used as a CSA farm and a well field for the town water supply. It would not yet fall under the oversight of the Conservation Commission and would need to be presented in that fashion.

At the end of the meeting, Barnes recognized a special constituent for her activism to protect the turtle population. Eight-year-old Aanya Soni will receive a toy turtle in recognition for her effort to have turtle crossing signs installed at several locations on Fruit Street.

“His name is Leonardo,” Barnes said of the stuffed animal.

Commission member Ed Harrow read a letter from Soni thanking him for responding to her letter to request protection for the turtles who were being killed as they tried to cross the street. She will be invited to the June 8 meeting, presumably with Leonardo.