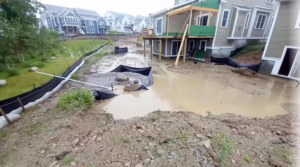 The Conservation Commission at its Tuesday meeting rebuked two projects for allowing violations that caused flooding and instability on their sites.

A cease and desist order was filed against The Trails, Hopkinton, a 55-and-over housing development located off Legacy Farms North Road, last Friday after violations of the order of conditions were observed. This continues a history of site violations dating back to 2018.

“We had a pretty significant violation of the order of conditions this past weekend,” ConCom chair Jeff Barnes said as conservation agent Kim Ciaramicoli displayed images of the flooded site from July 9. Barnes noted that violations had been observed as early as Nov. 1, 2018. There also was a violation on April 6 of this year preceding the rainstorms that deluged the site on July 2 and July 8-10.

“It’s my assessment that the commission has reasonably worked with the applicant to correct these violations,” Barnes continued. “And although they have been responsive and cooperative, we continue to see these recurring events at this development.”

At a May meeting, project engineer Peter Bemis was reprimanded for the April violation of the order of conditions issued under the bylaw. Fines of $6,000 from 2018 were held in abeyance but then were charged at the May meeting in response to the 2018 and April violations.

Over the past few months, Barnes said that he noticed a trend of developers being willing to accept fines for violations rather than taking swift corrective measures.

Several entities have been involved in this process, including Ashland’s Conservation Commission and Water Department because of the infiltration of sediment into its water system in the Hopkinton Reservoir, which a representative said caused concern about the ability of the water treatment plant to function properly and efficiently.

In addition to the cease and desist order, there were a number of conditions ordered, including updating and revising the erosion control plan to the commission. Plans should be designed and stamped by a professional engineer, and best management practices (BMPs) should be implemented. Erosion control blankets should be installed. The fines are being retabulated and will be discussed at an upcoming meeting.

“The site is totally unstable,” said member Jim Ciriello. “The site is a mess in terms of being wide open.”

Bemis was late in attending the hearing, saying he had to attend to a family matter. He wasn’t present when the conditions were read.

“I just want to say that those photos are particularly appalling and insulting,” said member Ted Barker-Hook. “And I find it particularly galling that Mr. Bemis has nothing to say to us.”

After he eventually joined the meeting, Bemis said work had been done since the most recent storm.

“We were overwhelmed with much of the erosion control measures that we had in place,” he explained.

Barnes said that he believes Bemis understands the gravity of the situation, telling him to “get everything in order at the site.”

Ciaramicoli noted that a cease and desist order also was issued by Hopkinton’s Building Department. Biweekly reports will need to be submitted by Bemis until the mitigation work is complete.

Resident Katie Towner did not think this went far enough, noting that there were two years when the company didn’t file reports.

“I think what we’re seeing here is the result of no planning for two years,” she said.

“I’m very disappointed in the commission,” Towner added. “That they have not followed up on the two years of absence of planning for these conditions and absence of reporting. I would like to see more action by the commission.”

Responded Barnes: “There hasn’t been inaction. … [The measures are] just inadequate.”

Developer Lou Petrozzi of Wall Street Development Corporation was not present at the beginning of the meeting when his hearing was called. However, he was able to present toward the end of the meeting regarding the inability of the erosion controls at his Leonard Street development to hold back the flooding from this past week’s storms.

Matt Varrell, the town’s environmental consultant, said that while erosion controls were functioning, the BMPs previously requested were not put in place. He called the site “a ticking time bomb.”

“My fear is that eventually, because that pipe hasn’t been installed … it’s going to form a channel that will carry all of that material offsite somewhere,” Varrell said.

Petrozzi reiterated that the site is “functioning properly” and has prevented some flooding issues.

Ciaramicoli asked when the schedule for the drainage would be put in place. The work was approved in the spring but has not been started.

Petrozzi said his crews couldn’t perform the work because the land was too wet. The pipe would have carried water into land that was already saturated.

Barnes said that Petrozzi failed to implement the suggestions of Varrell and Ciaramicoli, which was a concern.

“Something that Kim and I had talked about with Petrozzi that was very basic was essentially ignored,” Varrell replied.

Said Barnes: “I don’t feel like we’re getting off on the right foot on this project,” noting that the suggestion was not heeded, reports have been filed late, and BMPs have not been done.

Countered Petrozzi: “This is probably one of the most stable sites that you have in Hopkinton. I just can’t disagree with you more. We had a hurricane on Friday.”

Said Barnes: “If there was a hurricane on Friday, I would have been on the site Saturday, Sunday and Monday.” Barnes added that enforcement fines can be issued if problems continue.

A new plan will have to be submitted because of proposed changes to the grading, he added.

The last three lots for the Toll Brothers’ Chamberlain Street-Whalen Road project were reviewed, with Lots 1 and 2 approved in a 5-0 vote and Lot 12 rejected 3-2. At the commission’s request, the driveway for Lots 1 and 2 were combined on resubmitted plans. There was a reduction of 6,000 feet of work on the new proposal, and more permanent immovable barriers (PIBs) were added to the plan.

Resident Katie Towner talked about the incursion of development into the 50- to 100-foot buffer, which she called “a matter of course.”

Barnes explained that the decision to disturb the boundaries is at the discretion of the commission and “based on other mitigating factors.” On this application, he explained, the number of lots was reduced and a trail system was added.

Lot 12 is the most challenging of the project, according to John Kucich of Bohler Engineering, on behalf of the applicant. The structure could not be pulled out of the buffer zone, he explained. The rear and side lots were reduced and full roof drains were added.

Scott Goddard, a wetlands consultant from Goddard Engineering, said there was an “insignificant amount of buffer zone disturbance” in comparison to the entire project.

Varrell, the town’s environmental consultant, asked that a special condition be put in that care be taken regarding tree disturbance during the excavation as well as future encroachment of the lawn into the buffer zone. Shrubs that produce fruits and berries that the wildlife could enjoy could protect the lawn barrier and aid the site.

Barker-Hook said he couldn’t approve this lot because more than 50 percent of the work is going to be done within the buffer zone. He stressed that the commission has “given back” on every instance — not just the developer.

Kucich replied that the applicant did “everything they possibly can,” reducing lots and pulling back the roadway. Developer Paul Mastroianni noted that he voluntarily donated more than 50 acres of land to the town in perpetuity as part of the overall project.

The commission voted 5-0 to protect the land under the Wetlands Protection Act, with the special conditions noted. However, members Barker-Hook, Kerry Reed and Janine LeBlanc voted against the lot’s approval in a second vote.

Representatives from the Massachusetts Laborers Training Center project, which seeks to expand the East Street facility, appeared before the commission.

George Connors, representing the applicant, asked that the hearings on the Conti Building, the restoration plan and the fire pond dredging be continued because sediment samples have not yet been received. He went forward with the proposal for the headquarters building, which will be new. Erosion control measures were put into the plan, and additional testing had been performed recently. The hill will be reduced by 7 feet.

Barnes said that this proposal was “straightforward.” Varrell asked for a revised plan with the location of the PIBs marked. The notice of intent (NOI) was approved 5-0.

On the Crane Building, there were questions about stormwater roof runoff. It will be drained into the stormwater basins. A crane will be held in the 45-foot-high building for instructional purposes for the students. It was continued until the next meeting.

There was an issue discussed on the subdivision project off of Blueberry Lane. There was land that the developer wanted to have conserved in perpetuity. However, on some lots, only a portion of the lot could be affected. Instead, on these lots, it would have to be decided on these lots when subsequent development proposals come before the commission.

Adam Costa, the attorney representing the applicant, said nothing realistically could be done on those lots, and the commission would get “another bite at the apple” when Lots 47, 52 and 54 come under review.

The restriction would be on a portion of Adams Street (a new road off Blueberry) as well as Lots 48, 59 and 53, which are in the wetlands.

The request was continued upon submission of a new plan to the next meeting on July 27.