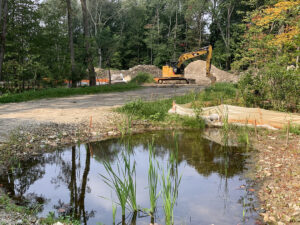 The Leonard Street development has had issues mitigating stormwater this summer. PHOTO/JERRY SPAR

The Conservation Commission at its Tuesday meeting issued an enforcement order on violations at the Leonard Street subdivision project, which over the past two months has been chastised for poor erosion control measures that allowed flooding on the site.

The order was ratified by a 6-0 vote after a long exchange about the inability to remove water from the construction area for the proposed detention basin area because of the recent inclement weather.

Lou Petrozzi of Wall Street Development Corporation appeared before the commission to discuss the methods he has employed over the past week to mitigate the situation.

“Essentially we’re fighting the battle that probably everybody is fighting these days with the rainstorms and the stormwater,” he said, “while we’re also trying to construct stormwater management facilities on the site.”

Water needed to be removed from the proposed detention area in order to install a culvert. However, Petrozzi said he was notified by conservation agent Kim Ciaramicoli that the area where he was redirecting the water was not in compliance with the stormwater pollution protection plan (SWPPP). Since that time, the pumping has stopped.

“The question for us is how do we de-water the detention basement so we can complete it and simultaneously install the culvert so that everything works the way it’s supposed to work,” Petrozzi said.

The problem arose because, while the requirement is to divert water 25 feet outside of a resource area, Petrozzi did not realize that the buffer zone was considered part of the resource area. He said Ciaramicoli pointed out an area where the water could be diverted, but it was up a slope, which perplexed him.

“It doesn’t make sense to pump it uphill only for it to drain back down into the area that we’re pumping from,” he said.

Petrozzi also changed his thinking about the work on the site. Instead of creating the detention basin first and working outward, he said the plan now is to built the outlet structure around the area first and then work inward.

Chair Jeff Barnes asked why the erosion controls couldn’t be fixed and asked if Petrozzi’s wetland consultant, Scott Goddard from Goddard Consulting, had a plan.

“We know you are trying to work with the commission on coming up with a plan,” Barnes said. “But we said at a previous meeting that it’s not our position or obligation or job to figure out for you how to manage your site.”

Petrozzi challenged the assertion that the site was dormant.

Replied Barnes: “It was cleared, I’ll give you that.”

Petrozzi said he hoped that the culvert could be installed next week.

Ciaramicoli said the water needed to be removed by Nov. 1, according to the order, which may require temporary detention basins. Any work to complete the stormwater mitigation would be in compliance with the order.

Petrozzi also appeared before the board for three amended notices of intent (NOI) for the three one-family homes he intends to build on the Leonard Street site.

Barnes explained that there are two different “levels of review” on the site. The town’s engineering firm, BETA Group, needed to perform the engineering review for work for infrastructure work such as installing the culvert. Lucas Environmental consultant Matt Varrell needs to perform biweekly site inspections on stormwater mitigation work, which would cost an additional $3,800.

“We have worked with you to minimize the fees that are occurring,” Barnes said, noting that Varrell’s inspections originally were scheduled to be weekly.

Regarding the amendments, Petrozzi said he was putting in a gravity sewer system. Rather than building walkout basements, he decided to regrade the land and build out the backyards.

Above-ground utility work also will need to be conducted. The current utility pole would be in the middle of a proposed driveway, so now one is being planned in another location.

This hearing was continued to the next meeting on Sept. 28.

The other main issue discussed Tuesday was the Connelly Farms subdivision off Hayden Rowe Street near the intersection with College Street.

Joe Marquedant from J.D. Marquedant & Associates land surveyors, representing applicant Ron Nation, said that the replication is proposed to be moved to the grass field to prevent the removal of trees where it originally was proposed about 200 feet away.

Goddard said that three NOIs for the lots have been submitted, with the remainder coming shortly.

Member Ted Barker-Hook said something to consider is that the some of the properties are up against the 100-foot buffer zone. He expressed concern that the yards would intrude into that buffer zone.

“I fear is that the commission, in allowing a development like that between Chamberlain and Whalen, has somehow sent the message that that’s OK,” he said. “I don’t think I’m comfortable with that becoming the new norm that as long as the building is out of the buffer that you can extend the development beyond that.”

The hearing was continued to the next meeting on Sept. 28.