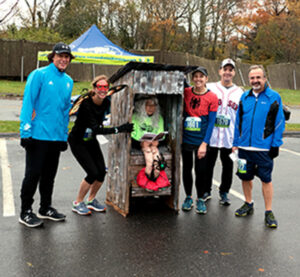 Runners are encouraged to wear Halloween costumes at the Wicked 5K, which is being held Oct. 27 at the Hopkinton Center for the Arts.

People of all ages, many dressed in Halloween costumes, will run or stroll in a 5K for a day of festive family fun on Sunday, Oct. 27, at 10:30 a.m at the Hopkinton Center for the Arts.

“It’s super fun because it’s a healthy way to celebrate Halloween because you dress up and then instead of just eating candy like we all do you’re exercising and having Halloween fun in a healthy way.” said Ilana Casady, co-director of the race.

The event was created in 2016, when Casady and fellow co-director Erin LePrad were talking with Enter Stage Left founder and HCA executive director Kelly Grill.

“Ilana and I were meeting with Kelly one day and sort of having a mass brainstorm of different fundraisers we could do for Enter Stage Left,” LePrad recalled. “Ilana’s a runner and I’m a runner. We just kind of looked at each other and said, ‘Hey, we should do a race.’ It just kind of took flight from there.”

The race is in a prime location for families as it’s traffic-free, providing a safe environment for families to enjoy the pre-Halloween excitement. Prizes will be awarded to the first three finishers in each of the six age groups as well as for the best costume.

Funds raised go directly to the non-profit organization as Enter Stage Left continues to provide the whole community with the opportunity to participate in local theater, an organization that produces theatrical fun for audiences and actors alike.

“We’re certainly not looking to make a huge profit, but we’re looking to sustain and put on these productions and bring entertainment to the community and continue to provide a place for adults like me who decided at 30 they’re going to get into theater.” LePrad said. “It’s a non-profit, so the money that comes in from the tickets goes right toward the rights to the shows that are done. It takes a lot of resources to put on these shows and we rely a lot on people’s donations and time.”

Added LePrad: “The race supports a wonderful community theater company that makes people feel like it’s a second home. It’s a really diverse group of community members and a lot of welcoming people.”

There also is a post-race party at the HCA where families can enjoy themselves with activities including pumpkin-carving, making other Halloween crafts, face-painting and participating in a raffle.

“If people want to have a fun, pre-Halloween day where they can dress up and bring the kids and know that they’re supporting a great cause, come have fun!” LePrad said.

To registered for the Wicked 5K go to racemenu.com/wicked5k. Preregistration is $35, while entering on race day is $40.