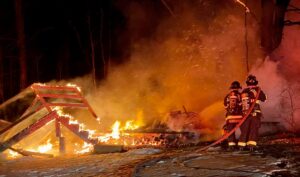 A fire that apparently started in a shed behind the Southborough Rod and Gun Club, which is located on Fruit Street in Hopkinton, spread to some trees but was quickly contained by fire crews Sunday night.

“It extended into the woods a little bit, and it was challenging,” Hopkinton Fire Chief Steve Slaman said Monday. “It had burned into some tree tops because it was so windy and dry out. So, most of our activity was working on the woods fire and keeping that from extending.”

Added Slaman: “The shed was gone when we got there, but the brush fire really could have been a challenge. But [the out-of-town crews] got a good hit on the brush fire, and it just took an hour of cutting some big trees that had fires on the tops and just wiping down the area. The crews did a nice job, and nobody got hurt.”

Slaman said the first call came in just before 8 p.m. Many of the calls were initiated by residents of Southborough and Westborough, as the property sits right on the border of all three towns.

The Southborough Fire Department responded first and soon was joined by crews from Westborough, Ashland and Hopkinton. Slaman said Hopkinton personnel were out handling two calls at the time: a medical emergency and some people trapped in an elevator at the Fairview Estates senior housing facility (no injuries were reported).

“We happened to have a couple of other calls going on at the same time so none of our duty crew was available,” Slaman said. “It was nice having the help from the other two towns that got calls. They were there and helped us really get on it.”

The Southborough firefighters “found the shed had already collapsed to the ground when they arrived and was burning, so it had been going for a little while,” Slaman said, noting that the shed appeared to be for warming, as it was equipped with electrical power and a wood stove.

“It was challenging to see any real origin area because the fire had burned [the shed] so extensively,” he said. “So we did some interviews and we’re just following up with some of that today. No cause has been determined yet.”

With dry, windy conditions, the town has been under a red flag warning — meaning there is an elevated fire risk — for much of the past few days and remained so Monday, even with temperatures in the 20s. Due to the risk, no open burning is allowed.

“Cold isn’t really the big factor. It’s all about the relative humidity and dryness of the earth, and the combination of the two is really bad,” Slaman said. “I definitely don’t like having people out in this. There were a lot of challenging conditions last night. The water was freezing up and you can get slip hazards and all that. So it’s not good to be out fighting brush fires in this type of weather. It was really, really windy last night.”