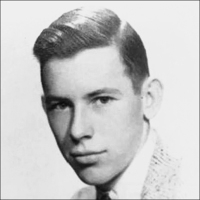 Charles A. Clifford of Foxboro, formerly of Falmouth and Watertown, died on March 12. He was the husband of Joan L. (Keenan) Clifford, who predeceased him in 2018. They were married for 65 years. Charlie and Joan raised their family in Belmont, Watertown and Falmouth before moving to Foxboro.

Charlie was born July 2, 1928, in Watertown, the fifth of six children of Clarence and Mary (Connors) Clifford. He graduated from St. Patrick’s High School, Class of 1946. Drafted into the Korean War, he served two years in the U.S. Army, traveling to Japan and when returning home twice celebrated the 1953 New Year when sailing over the International Date Line. He married Joan in St. Patrick’s Church in Watertown in 1953. He attended Northeastern University, graduating with a bachelor’s degree in business administration in 1959.

In his youth Charlie held many jobs, including at St. Patrick’s Church, Jordan Marsh and Higgins Ice Cream shop, bringing home pints of ice cream to his young bride. He started his business career at Hartford Life Insurance and then worked for John Hancock. In 1985 he launched his own business, Clifford Pension Services Inc., now Beacon Benefits, Inc.

Charlie was a communicant, Eucharistic minister and CCD teacher at St. Mary’s Church in Foxboro. He also was part of the church choir and the Serenading Seniors. In his retirement, Charlie volunteered at the Foxboro Historical Society and Foxboro Senior Center. Charlie and Joan loved to travel. He visited 48 of the 50 states and explored numerous European countries, including Ireland on many occasions, Australia, New Zealand, Central and South America. Wherever Charlie went he made friends, often visiting new friends made on his travels and frequently embarrassing his children and grandchildren as he chatted with people. Charlie enjoyed watching sports, his favorite team being the Boston Braves. Charlie loved to talk politics and was happy to see a Catholic Democrat back in the White House.

The family would like to express its gratitude to the compassionate staff at The Village at Willow Crossing for assisting Charlie and Joan over the years, and the staff from Old Colony Hospice for providing exceptional support.

A funeral Mass will be Wednesday, March 17, at 10 a.m., at St. Mary’s Church, 58 Carpenter St., Foxboro. Burial is at St. Patrick’s Cemetery, Watertown. COVID restrictions will be in place.

Arrangements are being handled by Robert & Sons Funeral Home, Foxboro.