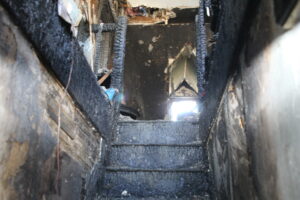 The stairway to the third-floor apartment at 17 Main St. is completely charred, as is the top railing, following Sunday’s fire. PHOTO/JOHN CARDILLO

One day after a three-alarm fire in the mixed-use building at 17 Main St., owners of the businesses in the building were on site Monday, taking stock of their property and cleaning up.

Hopkinton Deputy Fire Chief Bill Miller, who led the crews battling the blaze, said Monday that the fire was limited to a third-floor apartment, the attic and the roof line.

“The third floor and the attic had substantial damage, heavy charring, a lot of damage from the fire,” Miller said, noting that fire personnel created holes in the attic roof to release the gases that were building up.

The damage to the lower floors apparently occurred due to falling debris, smoke and water that was used to extinguish the blaze.

The owners of Hopkinton Chiropractic and Body Restoration, both located on the first floor, spent much of Monday going through their offices and cleaning their property. Body Restoration suffered minimal damage, as the business is located in a part of the building that juts out from the main structure where the fire was based. Hopkinton Chiropractic’s offices are in both sections of the building, and the part in the main structure suffered the most damage.

Fire Chief Steve Slaman said a joint investigation (Hopkinton Fire, Hopkinton Police and the State Fire Marshal) to determine the cause of the blaze is continuing. He added that it does not appear to be suspicious.

There were no injuries, although the two individuals who lived in the apartment were displaced, as the building has been declared uninhabitable by the town’s Building Department.

Miller said he was pleased with the Fire Department’s work — “Things went well,” he stated — in dealing with an unusually large fire for the town.

“It’s been a while since we’ve had one of this magnitude,” Miller said. “This is the largest we’ve seen in the last couple of years.” 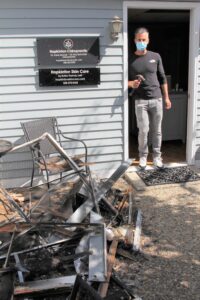 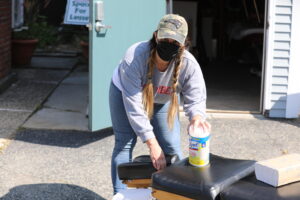 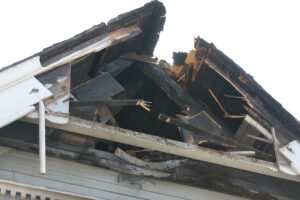 The roof of the building on the eastern side was damaged heavily. PHOTO/JOHN CARDILLO 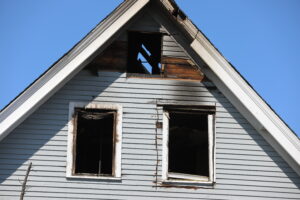 The upper portion of the building suffered the most damage. PHOTO/JOHN CARDILLO