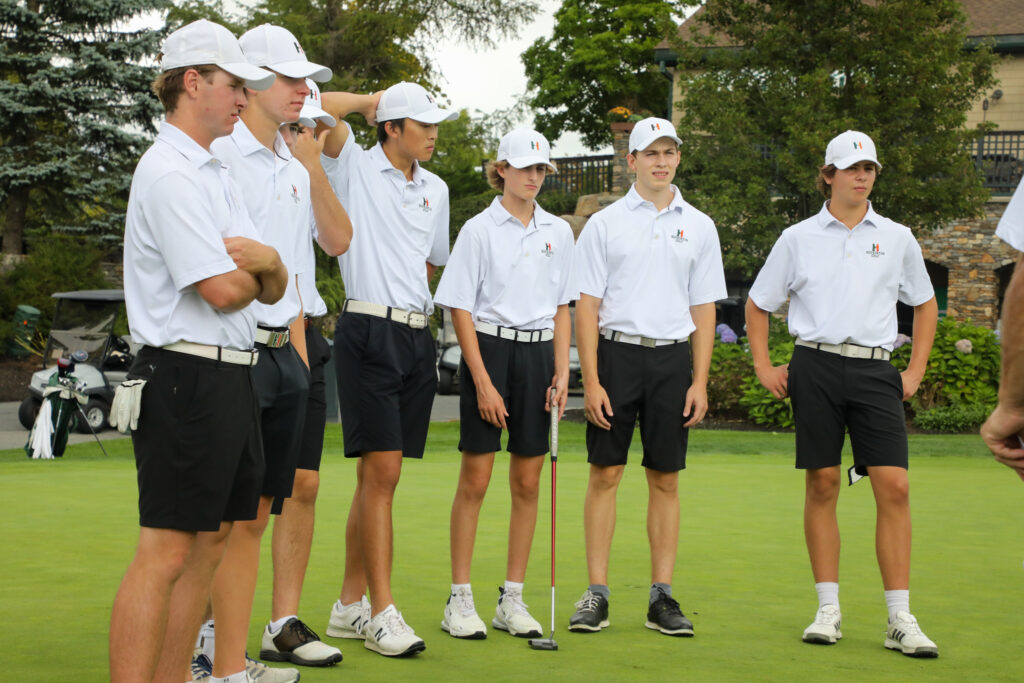 The HHS golf team features a deep, talented group that went undefeated during the first half of the season. PHOTO/JOHN CARDILLO

Hopkinton High School golf coach Bill Phaneuf has a problem that most coaches would love to have. With tournament time right around the corner, he has so many skilled players that finding a lineup of six for the districts or the states will be a challenge.

“It’s been a great year so far,” Phaneuf said. “We are playing good golf, we have played some tough teams, it’s just been a really good season.”

The Hillers have had some talented golfers over the years who frequently earned medalist honors during the stroke play matches. This year is no different, but the question is which player is going to be the one who goes low. Sophomore Parker Winn leads the team in that category, but seven players have shot the best score in a particular match through the course of the season. It’s a feat Phaneuf said is “unheard of.”

“It’s a consistent group,” Phaneuf said. “When they play well, any single one of them can win. That should set us up well for the postseason.”

The regular season has been kind to Hopkinton, with wins in its first 12 matches.

“I would say we exceeded expectations,” Phaneuf said. “I don’t think I really ever expected to be undefeated so far into the season. You figure someone at some point is going to have a bad round or the other team is going to play great. It’s hard to win them all.”

The winning streak included a pair of drama-filled 1-stroke victories. The Hillers beat Westwood by a single shot after Charlie Purpura drilled a 4-foot par putt on the final hole to secure a 41.

“We always tell the guys that every stroke counts,” Phaneuf said. “Literally the last putt that went in was the one that got us the win.”

In a 1-stroke win over Dover-Sherborn, senior captain Mike Liptak carded his best round of the year while playing in the final group to help his team to a victory. He capped the match with an up-and-down from a tough location off the green.

Senior captain Drew Morse has been the team’s No. 1 player this season, regularly averaging just a stroke or two over par for a nine-hole round.

“He has been very consistent,” Phaneuf said. “He’s been steady, even if he has a couple of bad holes, he can still salvage a round.”

Winn, the sophomore, has regularly been the No. 2 player in the lineup. Hopkinton has benefitted from strong play by Joe Doyle, who has been capable of shooting even par or even under par in certain matches. Leo Shinmura is another strong and steady player for the Hillers.

“He did medal in one match by shooting even par,” his coach said. “But he is always shooting 38 to 40. He is one of our most consistent guys.”

He isn’t the only consistent player on the roster, and the depth leaves Phaneuf happily working hard to figure out his postseason lineup.

“We have an odd team in that I have a lot of really good players without any super standouts, but at least 10 or 11 guys who have been worked into the varsity lineup and contributed,” Phaneuf said. “It’s a deep team and it’s been really fun so far.”