Dell EMC gives back to Hopkinton 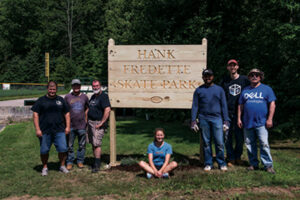 Over the years, EMC has been an active participant in the Hopkinton community. In the beginning, founder Dick Egan shook hands with former Superintendent Bill Hosmer, saying, “Whatever you need, call me,” followed by an initial distribution of computers to the schools to other current day contributions. And with the merger EMC and Dell, the Day of Giving continues.

Showing their continued commitment to the community, recently a group of Dell EMC employees, looking for a project, took a right turn into EMC Park. The project was right in front of them — two signs, which the group decided to repaint. But that proved to be a bigger job than anticipated. Finding the signs in complete disrepair and needing much more than a coat of paint, the volunteers built new signs made with a CNC (computer numeric control) router.

“They attached the boards together, sanded and prepared for painting,” wrote Gerry Fredette, who discovered he is a distant relative of Hank Fredette,  whose name graces the skate park.

Hank Fredette, a longtime Hopkinton resident, was a former police officer, superintendent of the Water Department and selectman. As a police officer, he was always looking to help the teens in town; skateboarding was just becoming popular then.  The skate park was named for him two years after his death from cancer.

Three students from the Hopkinton High School Honor Society — Nicole Breton, Kaylin Vaillancourt and Maya Vartabedian — helped paint two coats of gold on both signs. Konrad Dobkowski and others worked on a bench, which, surprisingly enough, came from Amazon.

The sign for the Hank Fredette Skate Park was erected a few weeks ago, while the bench and Hopkinton Community Playground sign were installed shortly thereafter. 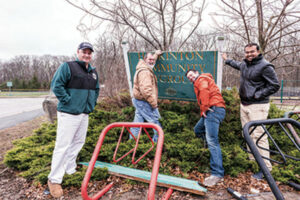 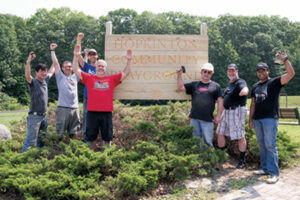