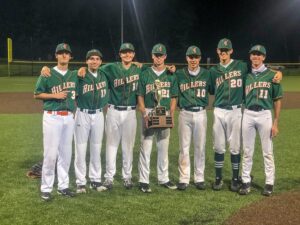 Hopkinton High School Class of 2020 players pose with the championship trophy Saturday night after leading Hopkinton to a win over Marlborough in the CMass Senior Babe Ruth League finals.

Hopkinton’s foray into the Central Mass. Senior Babe Ruth League may be short-lived, but for this summer the season has given Hopkinton High School 2020 graduates who saw their final baseball season scrapped by the pandemic a chance to take the field one more time.

“We put in so much work in the offseason, the whole team, then the news that the spring was canceled was not something the team or I wanted to hear,” second baseman Chase Dougherty said. “So being able to play summer ball has been great.”

Hopkinton made the most out of what may be its only season in the wood bat league, finishing first in the regular season with a 9-3 record and earning the top seed in the playoffs. The Hillers beat Framingham, 2-1, in the best-of-three semifinals and swept the best-of-three finals against Marlborough, clinching the title Saturday night.

“It’s been awesome,” coach Steve Simoes said. “It really feels good to give the graduating seniors a final season. The atmosphere around the team and the effort have been fantastic, it’s had a similar feel to the high school season.”

Simoes said all of the Class of 2020 players have made “outstanding” contributions to the successful squad this summer. Drew Rancatore (before he left for Duke University in early August) hit over .500 in the regular season, leading the league in hitting. Jack Breslin added a power bat in the middle of the lineup. 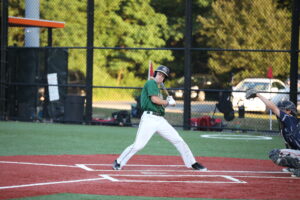 Jack Breslin leans out of the way of an inside pitch during Hopkinton’s Aug. 8 playoff game vs. Framingham. PHOTO/JOHN CARDILLO

A pair who will continue to play baseball in college, Tommy Ambrosone (Wheaton) and Alex Barker-Hook (Ithaca), have stood out as well, with Ambrosone playing center field and leading off and Barker-Hook batting cleanup and serving as the team’s top pitcher.

“They have been the glue that keeps everything together,” Simoes said.

Dougherty and 2020 classmate Ethan DeYoung had been slated to play big roles for the Hillers this spring, adding to the disappointment when the season was scrapped due to concerns about the ongoing COVID-19 pandemic.

Gabe Lopez, Nick Skiba and Austin Summers all were solid contributors for Hopkinton as well this summer, Simoes said.

The team was able and willing to play through guidelines brought on by the pandemic.

“We’ve followed the social distancing guidelines to the best of our ability,” Simoes said. “We put up barriers and extended our dugout so it’s very long.”

Team benches were replaced by individual buckets: each player brought his own bucket to the game to sit on when he wasn’t at bat or in the field.

“We wear masks in the dugouts, which can be hard at points,” Dougherty said. “But there wasn’t anything we couldn’t handle.”

This season served as a solution for players denied a spring season by the pandemic, but Simoes was unsure whether Hopkinton would continue to field a Senior Ruth team. In a normal year, Simoes, the coach of the HHS varsity team, would not be allowed to coach a summer league team as well.

“The variable is coaching, it’s a matter of whether somebody not associated with the program would want to coach,” he said. “I think it’s a great way for kids who don’t make [American] Legion to play with their schoolmates.”

But, in normal times, Legion ball and AAU often cut into the number of players who would make up the team. This summer, with the American Legion season canceled, Hopkinton had more than 20 rostered players who relished the chance to compete together.

“Just being able to play with my fiends, one last time,” Dougherty said, “it was a great experience.”