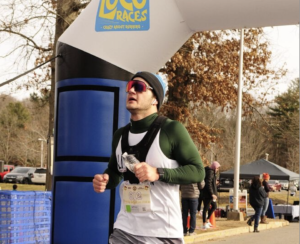 Jeff Doyle is running Boston for Live4Evan, a charity created in memory of one of his childhood friends in Hopkinton, Evan Girardi.

Jeff Doyle played football and lacrosse at Hopkinton High School prior to his graduation in 2009, but distance running is relatively new to him. Although he has watched the start of the Boston Marathon more than 20 times, this will be his first time running the course.

Doyle is running to raise money for Live4Evan, a charity named for one of Doyle’s childhood friends from Hopkinton. Evan Girardi was born with a congenital heart defect, and he passed away from an arrhythmia during his senior year of college in 2010. Live4Evan, started in his memory, provides housing to families whose children are undergoing congenital heart treatment at Boston Children’s Hospital.

“It’s especially meaningful to have Jeff running for us because [he] and Evan were such good friends,” said Shane Lavoie, Live4Evan co-founder and treasurer.

Doyle and Girardi spent their childhood summer weekends together, playing barefoot soccer and shooting on hockey nets. They would cool off by having iced tea or lemonade and jumping into a pool.

In the winter, they went skiing and snowboarding. “Evan would always be the most fearless person going down,” recalled Doyle. “I would be going so slow and be so scared the whole time while he was flying by.”

During the 2008 NBA playoffs, Doyle invited Girardi and other friends to come to his home to watch the Celtics games. “We had a tradition at halftime to walk to Cumberland Farms and get snacks for the second half,” remembered Doyle. “Evan would always get a slushy with all flavors mixed in the same cup.” The Celtics won the title that year, and the group of Hopkinton teenagers celebrated at the championship parade in Boston.

Doyle has run the Falmouth Road Race multiple times with Live4Evan, and he has done a few triathlons. He wanted his first marathon to be for Live4Evan, but other runners already had been assigned the Live4Evan charity bib for the past few years.

“I made sure that I asked the day after the last marathon ended, so I could get the next year’s [bib],” said Doyle. The goal is to raise $10,000 via his fundraising webpage (givengain.com/cause/48217/campaigns/22256/) to help Live4Evan open its fifth apartment.

Doyle started training rigorously in January and tries to do most of his long workouts on the weekend when he does not have to work. During his weekly long runs, volunteers from Live4Evan run with him. “It makes it a lot more enjoyable, because running alone for 18 miles is not very fun,” said Doyle.

He supplements some of his runs with other types of cardio, such as biking and swimming. Using a stationary bike, Doyle bikes around 75 miles a week. Because of his training volume, Doyle has memorized all of the Peloton classes, so he puts the videos on mute and watches TV shows while biking.

“It’s usually five to six hours of biking per week, so I can get through shows really quickly,” Doyle explained. Most recently, he was watching “The Book of Boba Fett” to pass the time.

“I still don’t think I’m very good at distance running,” Doyle said. “I am still more of a short-distance person, but I really want to do the marathon so I have been trying to figure it out.”

← MacLennan takes on Boston Marathon challenge for dignity of others Letter to the Editor: Coutinho for Select Board →