MacLennan takes on Boston Marathon challenge for dignity of others 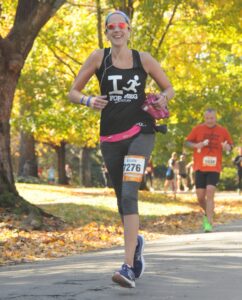 Nicole MacLennan, a Hopkinton resident of 15 years, will be running her first Boston Marathon this month.

“I’m really excited to have the chance to run a hometown race, it has always been a bucket list kind of race for me,” MacLennan says. “And I’m really looking forward to the opportunity to run for such a fantastic charity.”

MacLennan is raising funds for Dignity Matters, a Framingham-based nonprofit that provides feminine hygiene products, bras and underwear to women and girls who are homeless or in need.

“I really wasn’t a runner until after my kids were born,” MacLennan shares. She started running for fitness and got involved with a running group in Richmond, Virginia, where she went to college. After the death of Meg Menzies, a Virginia woman who was killed by a drunk driver in 2014 while training for the Boston Marathon, MacLennan joined a run in her honor.

“That running community really got me into running longer distance races,” MacLennan says, “and I’ve become friends with runners all over the country through that process.”

With two Richmond marathons under her belt, MacLennan has been preparing for Boston with Hopkinton Moms Run This Town, a group that meets up for “crazy early morning runs” before work once a week and gathers for longer runs on the weekend.

“It’s great to have the support of other people who are going through the same thing,” MacLennan says, “and we’ve been able to compare notes on fundraising and training routines.”

MacLennan already has raised more than $7,000 for Dignity Matters (her fundraising page can be found at tinyurl.com/4bsdxu72) and credits the support she has received from the community as well as her colleagues at Doble Engineering in Marlborough.

MacLennan became involved with Dignity Matters several years ago through a friend’s collection drive. “You think about food banks, clothing donations and things like that when you think about giving to people who are living in poverty or who are homeless,” MacLennan says, “and not a lot of people think about hygiene products.”

Adds MacLennan: “A lot of these women just don’t have access to the supplies that they need, and that creates a perpetuating issue. If they don’t have the supplies, then they can’t go out and interview for jobs or get out into the community and work to better their lives.” This also is a critical issue, MacLennan says, because SNAP (Supplemental Nutrition Assistance Program) benefits do not cover such supplies. “[Dignity Matters] is really committed to getting that information out to people and saying this shouldn’t be something people are embarrassed to need — it’s part of life,” she says.

Keeping others’ struggles in mind helps MacLennan get through a challenging race, she says. “I think a lot of people that I’m running for have far deeper challenges than I do. I’m running for a few hours to raise awareness and to raise money for this, for a purpose that’s bigger than that,” MacLennan says. “My race will end and I’ll go on and take a long nap and get a massage, but that challenge doesn’t end for the people I’m doing this for, and that has really kept me going through the training process.”

Many runners say that the actual race is “just your victory lap,” MacLennan says. “The training is the process and race day is about enjoying and getting to that point that you’ve trained all these months for, and I’m really looking forward to doing that for Boston. … I really just want to take it all in and absorb it.”