Dumas delivers on race day with inspiration from mother 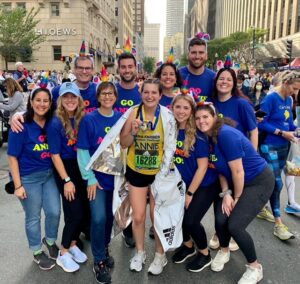 Annie Dumas was congratulated at the Boston Marathon finish area by family and friends, including her mother, Marilyn (front row, third from left), who inspired her to run to raise money for cancer research.

The 125th Boston Marathon — the first to be held in the fall instead of April — went off with no major issues Oct. 11. It was successful from a number of angles, including for local charity runners.

Annie Dumas, a 23-year-old physical therapy doctorate student who recently moved with her family to Rhode Island after spending her entire life in Hopkinton, has raised more than $37,000 for the Dana-Farber Cancer Institute. Dumas ran as a tribute to her mother, Marilyn, who has received treatment for ovarian cancer at Dana-Farber since being diagnosed in 2017.

“Everyone has just been so gracious,” Dumas said in an interview with WBZ-TV on race morning. “I’m running for my mom. Everyone loves my mom and wanted to donate to a great cause.”

Added Dumas on her fundraising page: “Watching my mom struggle through the years of cancer and all its side effects, but witnessing her incredible perseverance every day is the constant inspiration I need to complete this journey.”

Marilyn noted that she had been hesitant to go public with her cancer fight — and the family also was nervous about Annie reaching the fundraising commitment of $7,500.

“Little did we know far the ripples of support surrounding our family — and our close circle of people — would extend and by how much she would surpass that commitment,” Marilyn shared via email. “It’s been an amazing outcome!”

Donations have continued to come in, with the deadline this Friday.

Annie said it was special to participate in the race she had watched for many years.

“I grew up in Hopkinton, so I’ve been going to the start to the Marathon forever,” she said. “It’s really cool to just be able to finally run it myself.” 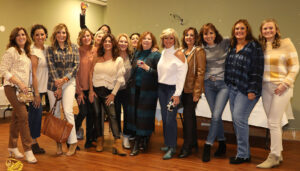 The event was started in 2019 and returned this fall following a COVID layoff. Organizers Marie Boyle and Kathy Mazur — both ovarian cancer (OC) survivors — report that both nights sold out, with 75 guests each evening.

Swoon (Mazur’s clothing business) donated 10 percent from sales at the show to the cause. All of the models were survivors of various cancers.

“Our goal is to continue to raise awareness about the symptoms of OC,” Boyle shared via email. “Unfortunately, there is not a prescreening tool to help diagnose OC. The money raised goes directly to a fund directed by Dr. Ursula Matulonis [Director of Gynecologic Oncology at Dana-Farber Cancer Institute] to research a pre-screening tool for ovarian cancer.”

For his Eagle Scout project, Hopkinton teenager Chris Holly reached out to Baypath Humane Society to find out what the local animal shelter needed.

“He asked what we could use and I asked if he could build some type of shelter in our back pen for our dogs to escape the sun, snow or light rain,” recounted Kathy Lundgren, Baypath’s outreach coordinator. “He also understood that we use that back pen a lot — we are very limited on space inside and outside — and would need to work efficiently to build the structure. I also explained that we have had other structures that would collapse or the rain would run off and create mud around the structure, so he was sure to slope it outside of the pen.” 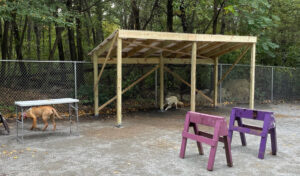 Holly’s finished product received immediate use, and he made an impact with both the facility’s animals and humans.

“What a very polite, hard-working young man he was,” Lundgren shared. “Communicated with me his intentions, showed me the plans, raised all of the money for the materials and completed the projects in the span of two Saturdays.”

The Hopkinton Emergency Fund is running a couple of fundraisers to help support its efforts to provide temporary financial assistance to community members facing challenging times.

One fundraiser is an auction to receive a ride to school with Officer Phil Powers, the town’s longtime school resource officer who is retiring early next year. Bidding recently was extended and now will close Friday.

Individuals also can help the Emergency Fund by purchasing items from Hopkinton’s Pampered Chef, which will donate 15 percent of purchases to the charity.

The Hopkinton Emergency Fund is a nonprofit that became operational earlier this year. It works with local human services organizations to identify individuals in need and provide assistance to meet basic needs.

John Ritz from the Hopkinton Trails Club reached out to remind residents that those who enjoy using Hopkinton’s trails should take caution in autumn, as many of the areas are open for hunting.

The state allows deer and bear hunting with bow and arrow and guns at various times from September through December. The complete schedule is at the Hopkinton Trails Club website (hopkintontrailsclub.com), where there also are tips for trail users. Among the suggestions: Wear brightly colored clothing, avoid wearing headphones or anything that limits your awareness, be aware of which areas are open, and avoid popular hunting times (dawn and dusk). …

On an unrelated note, Ritz also noted that while the Boston Marathon was held in the fall for the first time this year, it was not the first time Boston has hosted a fall marathon. Ritz still has his finisher’s certificate from the Bostonfest Marathon, which was held in 1983 entirely with Boston city limits. Traffic and other logistical issues proved too much for the event, however, and it was never held again.