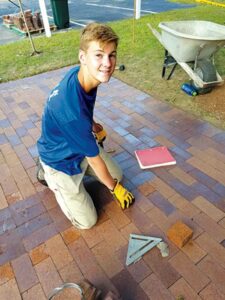 Troop 4 Boy Scout Jack Brennan worked on his Eagle Scout project at the Good Shepherd Church in Westborough, completing a brick patio with a cross outlined in the middle.

Selectmen at their April 9 meeting recognized and approved a proclamation for Troop 4 Eagle Scout Jack Brennan. A Hopkinton High School senior, Brennan is the son of Sgt. Timothy Brennan of the Hopkinton Police Department and Kim Brennan, the assistant scoutmaster for Troop 4. The award, earned on average by 4 percent of scouts nationwide, is a performance-based achievement with requirements in the areas of leadership, service and outdoor skills.

“It took a lot of preparation and planning,” Brennan told the board. “In the end, it came out really well.”

Materials and equipment were donated by Chip Baker, McIntyre Loam and Your Space Landscape Inc.

“McIntyre Loam donated quite a bit of it, so I’d like to thank Mr. Palmer and Mr. McIntyre, who unfortunately isn’t with us anymore,” Brennan said. “But he donated to many Eagle Scout projects before mine.”

Brennan was commended by the board for his dedication, achievement and community service.

Added Brian Herr: “Achieving this Eagle Scout now is something that you will carry with you for a long, long time — in fact, for your entire life. … The way the Eagle Scout goes with you is amazing.”

John Coutinho pointed out that Brennan was the third Eagle Scout recognized by the board since the middle of March and noted that while the national average is just 4 percent, it clearly must be higher than that in Hopkinton.

“We do this every week,” he said. “It’s an honor to yourself, to your family, and to the town. Thank you for being a leader in the youth of today.”

Irfan Nasrullah agreed with all the accolades and noted how well it reflects on the town.

“Even more importantly, it shows as a community what we are able to bring about, that we’re able to foster young children and bring them into positions of leadership and put you out there into the world with all these skills,” he said.

Brennan also will host the second annual Community Flag Retirement Ceremony in Hopkinton on June 14, with the time and location to be determined shortly. He emceed the first ceremony held last year, with a very positive response from the community members who attended.

“He is looking forward to hosting this again and making it an even more well-attended event,” Kim Brennan said.