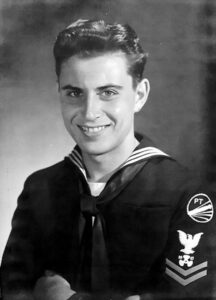 Edward Frank Bell, 95, of Hopkinton and formerly of Wyomissing, Pennsylvania, passed away unexpectedly but peacefully on May 9. Born in the Bronx, New York, he was the son of the late Maria (D’Andrea) and Michael A. Bell. He was the husband of the late Florence (Pantano) Bell.

A graduate of James Monroe High School in the Bronx, he joined the U.S. Navy after Pearl Harbor, becoming a PT boat mechanic in the Pacific. He also served in the Korean War. Afterward, he joined Crompton & Knowles, where he worked for 40 years until his retirement in 1993. In 1975 he was transferred to Reading, Pennsylvania, where he supervised the clothing dyes plant.

Ed loved working on his house, with no task too difficult to complete himself. He could build or fix anything, and always had a house project he was working on. Being outside and working on his garden brought him great joy, and even into his 90s he was taking care of his lawn and landscaping. He was an avid cook, and insisted on teaching his grandchildren how to make pasta from scratch. He enjoyed watching classic films, but most importantly he excelled in building very complex model ships. He started with PT boats, and through the years moved to exquisitely detailed 18th century U.S naval warships. Ed always put his family first and cherished spending time with all his relatives. A loving father and grandfather, he was looking forward to being a great-grandfather this fall.

Ed is survived by his son, Mark Edward Bell and his wife, Gayle Gonthier-Bell of Hopkinton, and two grandchildren, Jeffrey M. Bell and Marissa G. Bell. He is predeceased by his daughter, Karen J. Bell, who passed in 2008.

A memorial service was scheduled to be held in Pennsylvania. In lieu of flowers, donations may be made to the Ovarian Cancer Research Foundation (https://ocrahope.org/) in memory of his daughter, Karen. Arrangements are under the care of the Chesmore Funeral Home of Hopkinton (www.ChesmoreFuneralHome.com).