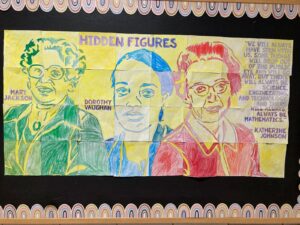 Among the Black historical figures recognized on the walls at Elmwood School this month are pioneering NASA scientists Mary Jackson, Dorothy Vaughan and Katherine Johnson.

Elmwood School is celebrating Black History Month with an art project conceived by a substitute teacher and adopted by the entire school of 600 students.

Keri Patterson, a third-grade long-term substitute teacher, said she was thinking about a class project that would engage her students and include the contributions made by historic and current Black leaders.

“I was looking for things to do that would be collaborative,” she said. “So much of history is about people collaborating on efforts.”

She decided on a collaborative poster project after finding it on Teachers Pay Teachers, an online resource for educators. The art was designed by a vendor called Art with Jenny K.

“It really seemed like the right fit for my students,” Patterson explained. “Some students are much better at expressing what they are thinking through images.”

Patterson shared her idea with fellow third-grade teacher Renuka Abbaraju, who said she loved the concept.

“I was so fascinated with it,” said Abbaraju, who co-founded the Elmwood Diversity Council with a colleague five years ago. “We started by putting up a collaborative poster in the hallway.” 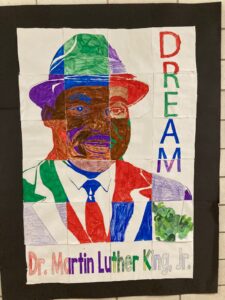 Soon other teachers became interested. Now all 25 classes have designed posters, engaging 600 students in the process and creating a tapestry of talent that lines the school’s hallways with images of Black idols and icons.

“The posters started sparking conversations in the hallways,” Abbaraju said, noting that a biography accompanies each collaborative poster. “There is a good mix of women and men, not just political figures but business leaders, artists, scientists and athletes.”

“We covered the whole spectrum of achievements,” Patterson added. “It was eye opening for the students to discover all aspects of achievement. I asked my class to write about how this person changed the world.”

Abbaraju’s class focused on Madam C. J. Walker, not only completing the poster but also writing about her and discussing the accomplishments of the activist and entrepreneur.

“We had to do a little research on her and why is this person important,” she said.

In a Zoom meeting on Feb. 8, students from both classes talked about what they learned through the collaborative process.

Maulya explained that she learned about a woman named Sarah Breedlove.

“We learned that she was a famous hair grower,” Maulya said. “After that, she changed her name to Madame C.J. Walker.”

She and her classmates took pieces of blue and pink paper and colored them.

“Then we taped them outside of the classroom so it looks like a picture,” she continued.

Sophia learned that Breedlove was the first African American millionaire.

“She also had a hairdresser team that helped her,” she added.

“At first, her parents were slaves,” said Drew as he described Walker’s history. “She had to pick cotton on a farm. She went from doing that to working at this laundry place.

“Since she could not get the stuff that she needed, her hair started to fall out,” he continued. “Because she worked at a laundry, she knew about some ingredients. She started mixing them together. When she put it on her hair, her scalp started to heal and her hair grew back.”

Piper said she would like to do a similar project in the future.

“I like art,” she said. “I like drawing. And I liked that we got to learn about different people.”

Kayla said she was inspired by the story of Rosa Parks.

“She went on a bus, and she wouldn’t give up her seat for a white person,” she explained. “She got put jail. But then she changed the laws so people started riding the buses the way they do now.”

Sophia later added that her favorite poster was of Biles because they shared a common interest.

“I compete in gymnastics, and I really like her because I think she’s the best gymnast in the world,” she said. “She inspires me a lot.”

“I learned that it doesn’t matter about their skin or their body,” added Cole. “All that matters is about their career and how all of them made good choices.”

Maulya said one of her favorite people to learn about was Katherine Johnson, who worked for NASA.

Abhinav said he learned that Carver “discovered peanut butter and he loved to study the land.”

Abbaraju, now in her eighth year of teaching third grade at Elmwood, began her career teaching economics to college undergraduates in India. Over the course of her career, she has instructed students from kindergarten to high school.

“I believe that every child is a unique individual with capacity for learning and high achievement,” she said. “My role as a teacher is to help students meet their fullest potential and motivate them to become independent lifelong learners.”

At a time when the pandemic has physically separated students from the traditional experience of learning, the project has created a sense of unity, according to Abbaraju.

“The best part is that it is bringing the whole community together,” she said.

Patterson has devoted her entire professional life toward the education of children, spending the first two decades of her career as a children’s fitness instructor in New York City. This past year, she earned her master’s degree in elementary education as well as her teaching license.

“I’m new to the Elmwood community and am gratefully filling roles this year initially as a second-grade long-term substitute and currently as a third-grade long-term substitute,” she said. “The biggest reason I choose to teach children is to help them see that they each have their own, unique superpower, and to appreciate everyone else’s as well. If I can help teach children to believe in themselves and others, then they will have the tools they need to become happy, empathetic and empowered adults.”

“Even though this is Black History Month, we like to pride ourselves that every day, diversity, equity and inclusion is at the forefront of what we do here,” noted Assistant Principal Jason Dimen. “Dr. King’s words rang true. It doesn’t matter about the color of your skin but the content of your character, your skills, and your courage.

“The students have learned a lot throughout this project,” he continued as he motioned toward the class. “I hope we can continue to look at the curriculum to look at the places where we can expand on the history of people who have been oppressed and celebrate their successes. As you can see in the classroom, we have all kinds of skin color, but that doesn’t matter here. It matters how you carry yourself and how you achieve.”