Simoes shines while playing for father 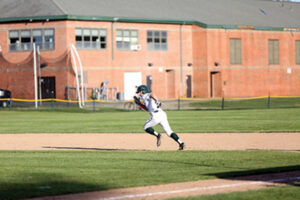 Hopkinton High School senior Stephen Simoes had a couple of tough calls when it came to extending his athletic career. Not only did he have to decide where to go to college, he also needed to figure out which sport to play.

The answers for the 18-year-old are “Bowdoin College” and “baseball.”

Hanging up the skates wasn’t an easy call. Simoes was part of a Hillers team that advanced to the Division 3 state final at TD Garden this past winter.

“I think it was a tough decision not to play hockey anymore after that really memorable run,” said his father, Steve.

But the catcher and infielder has been a star on the baseball diamond as well. He hit .430 last season and was named team and Tri-Valley League MVP. He started this season strong, hitting two home runs, including a grand slam, in the first week of the campaign.

His father, who said hitting has been the strongest part of his son’s game, is not only Stephen’s dad, he’s also the HHS baseball coach and one of Stephen’s teachers. He said Stephen’s throwing arm is something he will need to manage after suffering some damage to his shoulder.

“I think he is a college-level catcher, but he will need a secondary position to give his arm a break,” the senior Simoes said.

Stephen said he loves catching, but noted his brother, Tim Simoes, is an infielder at Army. The college choice for Stephen came down to a combination of finding the right fit in terms of baseball and academics. With help from his father and his mother, Sheryl, Simoes said he found that in Brunswick, Maine.

“I think a lot of it had to do with the coach who was recruiting me,” Simoes said. “We really liked him and he preaches the same things me dad has for a while, so it seemed like a good fit.”

Part of that “preaching” is a focus on academics and being a good person before finding success on the baseball diamond.

Simoes does not plan to declare a major before entering college, but said he is interested in studying government and political science.

Simoes said playing for his dad and having him in school has become more normal.

“It’s been interesting, at first I remember I was nervous thinking about what it would be like to have him as a teacher, but I am used to it now,” he said. “He tries to treat me the same. It doesn’t always work out that way, but when you see him at home, on the field, in the classroom, you see a lot of different sides.”

Said the father/coach/teacher: “I was worried about it initially, but it’s been great, it’s been easy. He goes about his business and it’s hard sometimes not to get on him too much, but we find the balance.”

Quipped the elder Simoes, drawing agreement from his son: “As long as he plays well and shuts up, it all works out.”