A 5K race and Octoberfest will be held Saturday, Oct. 5, in memory of a young man whose legacy has touched the hearts of many.

The annual Live4Evan 5K begins at 10 a.m. The USTAF certified course starts behind Hopkinton High School, goes through downtown Hopkinton and ends at EMC Park, where there will be live music, food trucks, a beer garden and fun activities for the kids, including a cornhole tournament.

The organizers hope to draw 600 participants for what will be the seventh and final Live4Evan 5K. 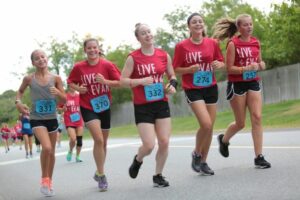 “We have been so honored with the support we have received with the 5K races and our organization has been able to grow a lot because of their success,” said Shane Lavoie, one of the co-founders of the Live4Evan organization, who went on to say that the group will be moving away from the annual 5K to concentrate on other exciting fundraising events.

The Live4Evan organization was founded in 2013 in memory of Evan Girardi, a Hopkinton High School graduate who passed away from a heart arrhythmia during his senior year at college in 2010.

Girardi was born with a congenital heart defect known as corrected L-transposition of the great arteries. Although the prognosis was grim, Girardi’s family said he grew up to be a happy, bright and active child who rarely showed any signs of having a heart defect. By Girardi’s senior year of high school the defect had begun to have negative effects on his heart, and his doctors recommended he undergo open heart surgery. Over the next three years, Girardi continued to live life to the fullest while still receiving ongoing medical treatment. He attended Loyola University, held summer internships at EMC Corporation and even studied abroad in Italy.

After his passing, a number of friends approached Girardi’s parents, Michael and Barbara, about doing something to honor his memory.

“When we first started we didn’t really know what our cause would be, but we knew that we wanted to do something that was special for Evan,” said Lavoie, who had been friends with Girardi since the third grade. 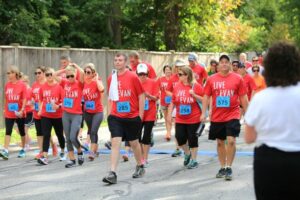 The Live4Evan members, primarily friends and family, started out by organizing a 5K race to raise money that went to scholarships in Girardi’s name. Six years later, the Live4Evan organization has raised more than $200,000, which is being used to support families affected by congenital heart defects by providing temporary housing while their child receives cardiac treatment at Boston Children’s Hospital.

“People come from far and wide to receive care at Boston Children’s for their child who has a heart condition,” Lavoie said. The problem for those families, said Lavoie, is the expense of a long-term stay. Thanks to the support of so many people, especially from those in Hopkinton, the Live4Evan organization has been able to rent two apartments in Boston close to Children’s Hospital for families to stay free of charge while their child is receiving treatment.

“We have had people from all over the country stay there, and even from as far away as Germany,” Lavoie said.

The organization hopes to be able to secure additional apartments in Boston for the many families that come to Boston Children’s for treatment and care.

“Our goal is to have up to 40 apartments for families,” Lavoie said. “That is how many are needed for families who come to receive care at the best hospital in the world.”

In reflecting on how his childhood friend would feel about the fact that his legacy has helped so many other children with a congenital heart disease, Lavoie said that Girardi probably would be surprised.

“He was so humble,” Lavoie said. “But he would be honored to know that his legacy has helped and will continue to help these kids and their families now and in the future.”

For more information or to register for the Oct. 5 Live4Evan 5K, go to live4evan.org/run-fun-fest.