Fire Chief: Even with new hires, ‘department at capacity’ 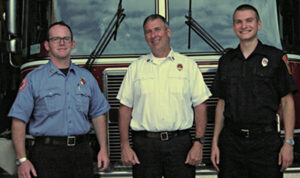 Hopkinton Fire Chief Steve Slaman sat down with the Hopkinton Independent earlier this month to talk about staff changes and challenges ahead for the Fire Department.

As for changes, Slaman was in the process of hiring the second of two new firefighters, which will bring the department to a total of 29.

“We had requested four new positions and the town agreed to two,” said Slaman.

While the department was still in hiring negotiations with one candidate, the other, John de Rivera, 23, of Northbridge, is in his first month with the Fire Department.

A former Northbridge firefighter, de Rivera has a bachelor’s degree in biochemistry from Worcester Polytechnic Institute and a paramedic certificate from Quinsigamond Community College.

“All our newest firefighters are also paramedics,” said Slaman.

Once hired, the next new firefighter will take the place of John Sheridan, who has been promoted to Training Officer.

“That position has been vacant for a few years and we recently got approval to reactivate it,” Slaman said.

But even with the new hires, there are plenty of challenges to be faced, said Slaman.

“Covering 20 square miles of town from one fire house is a big concern,” he said.

While there are no plans in the works for a second firehouse, Slaman said he has had discussions about the possibility with town officials.

Slaman has also recently testified publicly before the Board of Selectmen and Planning Board about the challenges facing his department.

The message: “We’re at capacity,” he told the boards.

The busiest time for the Fire Department is from 6 a.m. to 9 p.m., Monday through Friday.

Keeping the shifts properly manned during those hours, he said, involves a good deal of creative juggling.

“In the last year, we responded to 2,253 calls for service. Out of those, 1,900 were effective responses. It’s the remaining 253 that were not which concern me,” he said.

Risk assessment is the name of the game for Slaman.

He keeps track of a lot of numbers, not the least of which are those reflecting the rapidly growing population in Hopkinton.

And regular trips to the Town Clerk’s office help to keep him informed.

But it’s not just increasing development that challenges the department’s ability to respond; it’s the kind of development.

The addition of assisted care facilities, along with an emergency care facility, has dramatically increased the number of calls for service.

Another factor Slaman noted, is that the percentage of responses per 1,000 residents has also increased. This, he infers, may be due to an aging population.

Growth is not the only challenge facing Slaman’s department. Access is another.

Changes in federal highway laws have resulted in limited access to major highways like the Massachusetts Turnpike and Rte. 495.

Not only is it harder to gain access, Slaman said, but once on, it is harder to quickly reverse direction. All of which increases response times.

“There we have responses that are more labor intensive,” said Slaman. 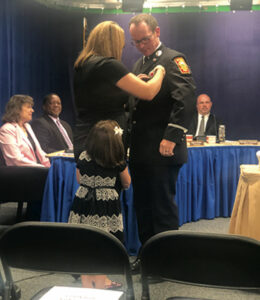 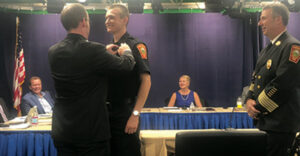