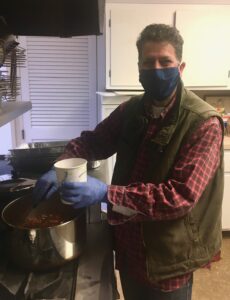 For the last six years, Brian Le Suer has spent almost every third Thursday of the month serving food to around 70 people from local communities.

Le Seur has been a resident of Hopkinton since 1992 and is CEO of Zeenyx Software, a small company that specializes in software testing tools. In the early 2000s, Le Suer was the leader of a youth group that included his sons, Jake and James. The group went on mission trips, volunteered at different soup kitchens and gained a passion for community service. On one trip, Le Suer visited the St. Francis House in Philadelphia and was inspired by how organizers fed community members there.

“They had a different idea about serving the vulnerable community,” explains Le Suer. “They wanted to serve people in a dignified way.” St. Francis House serves food the same way a restaurant gives food to its patrons.

Adapting the St. Francis House philosophy, Le Suer and Miki Mitchell, members of the United Parish of Upton’s Faith in Action committee, started community suppers six years ago. A core belief of the program is preparing meals that volunteers’ own families would eat.

“The idea of our supper is that it is not a traditional kind of soup kitchen meal,” Le Suer said. “It is a really good meal. It is very hearty, healthy and delicious.”

The volunteers make the meal without using pre-packaged ingredients. The meal includes two entrees, including a vegetarian option, bread and dessert, often brownies or chocolate chip cookies. The community supper typically serves 60-100 people at no cost to patrons, and anyone can attend.

A patron favorite is the chili meal that is served in October. The volunteers make two to three different kinds of chili, including one with the surprise ingredient of sweet potatoes.

The cooking process begins with volunteers shopping for ingredients on the Tuesday before, and they make some of the meal at their own home the night before. They also take half a day off of work on Thursday to finish preparing the dinner at the church.

The community supper does not solicit donations, but some choose to donate money anonymously. Panera Bread in Westborough donates excess bread and pastries, and at 6:30 on the morning of the supper, Le Suer goes to pick up the food.

Before COVID, community members, often those who suffered from food insecurity and congregation members, were invited into the church. The guests would sit down and eat a meal together. Volunteers enlisted the youth group to help set up the lower vestry, a community room, and serve food.

“People from our church would come, and it gave them an opportunity to share a meal with folks they didn’t know,” explained Le Suer. “Over the years, we really got to know quite a few of our patrons. People feel comfortable and welcome in the community suppers, and nobody is a stranger.”

In March 2020, when the COVID lockdown started, community suppers had to stop for almost a year.

“We just didn’t feel like it was safe for us to provide a meal to someone who might be vulnerable,” explained Le Suer. “As soon as we were vaccinated, the very next Thursday we started our meals up again.”

However, the community supper now looks different than it did pre-pandemic. Instead of sit-down meals inside the church, the volunteers prepare takeout bags for all of the patrons, and they have runners go out to the parking lot at the church to deliver the food to cars. Patrons order food the Friday before.

“We are happy that we’re still able to offer a meal even though we can’t offer the fellowship that comes when we’re able to eat together,” said Le Suer. They hope to resume sit-down meals again in the spring.

“When we created our supper, we wanted it to be a meal just like the one we serve our own families, and it really is,” said Le Suer. “It is delicious. We eat the same meal.”