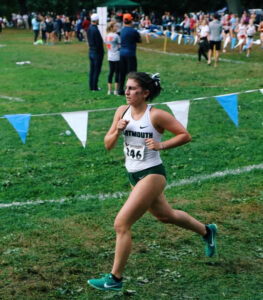 After completing her college running career at Dartmouth, Isabelle Giordano returns to her hometown to try the Boston Marathon.

Isabelle Giordano is no stranger to running. As a student at Hopkinton High School, she earned all-state recognition in track and field and broke nine school records. She went on to a standout track career at Dartmouth College.

But those were much shorter races than the one she plans to tackle this month: the Boston Marathon.

“I thought this would be a good way to continue running and a good way to support the town that supported me throughout my youth,” Giordano said.

She will be running to raise money for the Hopkinton Emergency Fund (givengain.com/cc/hopkinton-emergncy-fund/projects/active), which she said was a good way to give back.

“Hopkinton is just such a great community and I just got really lucky that they needed a runner,” Giordano said. “I feel like it’s special to support the town.”

Giordano said she is proud to be a part of the town’s strong running community. In addition to rewriting the school record book, the middle distance runner took part in competitions on the national level with some of the HHS relay teams.

Running Boston has brought Giordano back to training after the second half of her college career was upended by the COVID-19 pandemic. She was able to take part in a home meet during her senior year, this past academic year. She was wearing a mask while running but said it was good to lace up her spikes and put on a Dartmouth uniform one more time.

The 2020 season came to an abrupt end after the Ivy League championships that winter, as the onset of the pandemic led the conference to scrap the entire spring slate.

“It was really sad, I just felt like I didn’t get to achieve my goals,” Giordano said. “I definitely tried to reframe the experience, though, because the people are what made it special. I don’t look back and say, ‘Oh, I wish I had this time.’ I will say, ‘I had these lovely memories of running with my teammates.’ ”

Taking on the challenge of her first marathon has given the competitive athlete another goal to work toward. Training has been challenging, and some nagging injuries have set her back a bit, but Giordano said she is on track to complete her training and be ready to race on Oct. 11.

This is her first marathon, but it might not be her last. Giordano said she will take some time after the race to see how her body recovers, but she could see herself wanting to run another 26.2 in the future. She also will be running this fall with some of her school friends, she said, and is looking forward to being on the other side of the world-famous start line after being a spectator all of these years.

“Starting in my hometown is going to be such a cool experience, this is something I have watched since I was a little kid,” Giordano said. “It will be surreal to be on the starting line.”