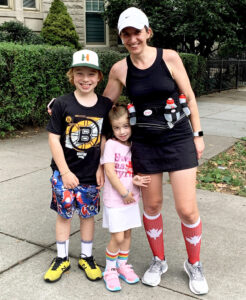 Marla Oram is paying it forward by running the 125th Boston Marathon on behalf of the the Hopkinton High School Business Professionals of America Club and the district’s robotics team.

“I am thrilled to be running my first full marathon and also support the talented students of Hopkinton,” Oram stated. She is running in anticipation that her children, 8-year-old Nolan and 5-year-old Cecily, soon will benefit from the programs. She also has an “extra special place in my heart for technology, especially when it comes to how we can empower our next generation through learning,” as an employee of Dell Technologies.

Oram took up running as a hobby when living in her native Nova Scotia.

“While I was commuting to work, I saw the town’s running club on the streets and thought it would be something I’d like to do,” she said, noting although she had not run before, she has always been active. Joining the club, Oram began by running 5K and 10K races. When the couple moved to Massachusetts 11 years ago for her husband’s job with EMC — now Dell Technologies — she extended her runs to half-marathons, completing four in the last several years.

Her husband, Nate, who has Type 1 diabetes, ran in the 2019 Boston Marathon as part of the Joslin Diabetes Center team. With their runs bookending the pandemic, Oram said, “It is fun to be running marathons back to back. Now each one of our kids will have a marathon medal.”

Her husband’s charity run inspired her to follow a similar route this year. Oram put the word out, and Doug Scott, advisor for the Business Professionals of America (BPA) Club and robotics team, open to middle and high school students, contacted her about running. Scott had applied for and received one of the charity runner bids provided to Hopkinton by the Boston Athletic Association, in consultation with the town’s Select Board.

Oram is excited to run for the technology program.

“My kids live in town and will benefit from participating in the BPA and the robotics team,” she said. “I want give back to the town for the opportunities that they will have.” 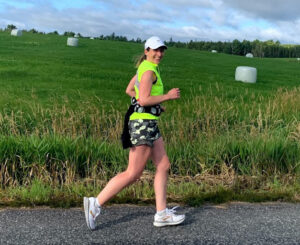 Hopkinton resident Marla Oram trained for the Oct. 11 Boston Marathon by running along roads in Nova Scotia this past summer.

As a charity runner, Oram hopes to raise $5,000 through donations from the community. According to Scott, all the funds Oram raises will be given to the club and team to use “for materials, registration fees and potentially travel expenses to attend national competitions.”

Oram began training June 1 for the Oct. 11 event following a strict schedule of shorter runs during the week and gradually longer runs on weekends. This past summer she trained in Nova Scotia, where the family spends five to six weeks each year.

“We are Canadian citizens, so we are allowed back in our country, “ she said. “Much of my summer training was running on roads along the Atlantic Ocean. It does not get much better than that.”

At home in Hopkinton, she tries to run in the mornings before she goes to work in human resources at Dell. Her runs typically take place in the center of town around the schools and the marathon start line, since the family lives in that location. Her longer weekend training peaked in September with an 18-mile run from Framingham to Boston early in the month and 20 miles two weeks later.

Thrilled to be running Oct. 11, Oram writes on her GoFundMe page that she is “full STEAM ahead” — referencing the acronym for science, technology, engineering, arts and math — for the 2021 Boston Marathon and in her support of Hopkinton’s BPA club and robotics team.

Oram is accepting donations online at GoFund.me/f99c7939. The page provides a link for Dell employees, since the firm matches each employee donation dollar for dollar. Donations are open until Nov. 1.