Freya Proudman is a self-described “first-generation U.S. immigrant” who graduated from Hopkinton High School in 2018. Yet until she attended a recent training as a member of the Hopkinton Freedom Team, she said she hadn’t felt a true sense of belonging in the town.

“I come from a cultural linguistic minority group and I’m part of the LGBT+ community,” she explained, noting that she emigrated from Wales as a young child and speaks the Welsh language. “It was so incredibly heartwarming to see people learn tools to help make Hopkinton more inclusive, safe and welcoming for people like me and other members of racial and social minority groups.”

The Hopkinton Freedom Team (hopkintonfreedomteam.org) is holding a two-part active bystander training on May 18 and June 9 (5:30-8 p.m. both nights) to help people constructively resolve everything from microaggressions to witnessing acts of violence or abuse, such as the murder of George Floyd and the recent bystander shooting death of a Boston grandmother. It is cosponsored by Hopkinton Youth & Family Services and supported by members of the Hopkinton Youth Commission and the Hopkinton Cultural Council. The sessions are run by True Story Theater, a nonprofit improvisational theater group based in Arlington that seeks to create understanding, empathy and cultural competency by acting out real-life situations. 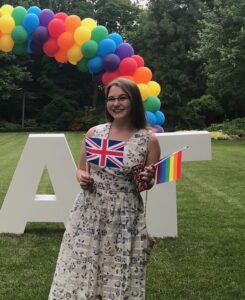 Hopkinton’s Freya Proudman, who emigrated from Wales as a young child, is among those participating in the Hopkinton Freedom Team’s active bystander training, a program that seeks to encourage individuals to find ways to resolve tense situations, especially those that involve prejudice.

“I think the perspective that I bring to this a lot of young people feel that, when it comes to issues of diversity and inclusion, the generations above us aren’t necessarily as aware or engaged,” Proudman said. “To be honest, I really don’t think that’s the case. I think that while young voices might often be the leaders of some of these movements, I think our active bystander training event showed that people of older generations are really waking up and are just as much a part of this movement for greater inclusivity as us young people are.”

Many times, people who witness acts of microaggression or bigotry are not sure how to act or believe someone else will speak up in a person’s defense, said organizer Cathleen Dinsmore of the Hopkinton Freedom Team. This training provides constructive methods to handle various situations.

“Not only do we have different generations together, which is really exciting, but different groups as well,” Dinsmore said. “You can’t work on justice for one group without including everybody. That’s what people are starting to get to.”

Dinsmore said the previous training was attended by town officials and employees to help explore ways to understand and embrace the changing dynamics in Hopkinton.

“One thing True Story explained is that you can agree to disagree,” she said. “You can maintain your integrity and beliefs. But you need to find that common ground, and there’s always something you can start with.”

Planning Board member Muriel Kramer, who is a social worker, said she garnered a wealth of information from the training sessions she attended and was excited to see this expand on a community-wide level.

“I really feel like I learned a lot,” she said. “It was importantly hard. It offered a scaffolding for those who didn’t have knowledge. The way they guide this discussion is very intentional.”

Breakout sessions presented small groups with a challenging situation that they had to resolve.

“For me, what I thought was so important was building the bridge in conversation and interaction,” Kramer said. “The conversations were rich, complex, perhaps difficult, respectful but intentionally building towards understanding.”

Cheryl Perreault has a background in psychology. She pointed out that one reason the training is important is because it emphasized listening skills that may be declining in a world of technology and social media.

“There’s the important work of stopping before reacting and working to discover common ground,” she explained. “This is an exciting time to be looking after one another and caring for one another as connected people, as a human family.”

Added Kramer: “We have to find ways to meet conversationally in the middle in ways that incorporate truths.”

Stacia Friedrich Krozy said she has attended a number of trainings previously. However, this one stood out.

“I felt like I walked out of there with memorizations and tools that I have used as well as increased confidence,” she said. “At the second session, we talked about situations where we implemented them. I felt like these tools would stick with me for the rest of my life.”

The second session deals with more complex situations and knowing how and when to intervene while maintaining personal safety.

She noted that major shifts will not happen overnight. But the training provides the building blocks to engage in ongoing work.

All members agreed that the virtual environment actually improved deeper listening and participation. It was a safe space where people could connect names with faces.

“I like the intimacy of the Zoom,” Dinsmore said. “I felt I could be a little bit more comfortable than a role-playing situation in person.”

“Sometimes it’s so easy to feel like the world is against you,” noted Proudman. “But having a whole Zoom screen of people who care and who want to make the town better is such a comforting and moving thought. I can’t stress enough how important it is to have good allies. You come away feeling like people really care for you.

“I would encourage everyone to attend this, even just as a sign that you see us and you hear us and you’re trying,” she added. “I think that’s all we can ask for.”