Gaughan with the win: Record-setting season at Franciscan for goalie from Hopkinton 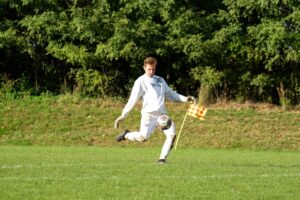 Followers of Hopkinton High School soccer would not have been surprised that Brian Gaughan earned a spot on the team at Franciscan University in Steubenville, Ohio.
However, the fact that Gaughan played goalie — and broke school records this past fall as a sophomore — probably turned some heads. After all, Gaughan never played in net for the HHS varsity.

“I have always loved goalie,” Gaughan said. “I had always grown up playing goalie, but I hadn’t played goalie since freshman year of high school because I dislocated my shoulder. Last winter I got shoulder surgery, which allowed me to play goalie again.”

Gaughan broke the school’s season records for wins (12), saves (87) and goals-against average (1.35) in 2018. The sophomore started every game and played the full 90 minutes of most, helping the Barons to the semifinal round of the Allegheny Mountain Collegiate Conference playoffs and an ECAC Division 3 tournament berth. The team finished with a 12-8 record, the most wins in the program’s history.

Though on the Barons roster as a rookie, Gaughan never played after re-injuring his shoulder diving to make a save on the first day of tryouts. Following surgery, he readjusted to goal quickly.

“Brian is a humble, respectful, hard-working, coachable, team player,” Franciscan coach Christian Bobak said. “He has certainly earned everyone’s respect through his play and attitude. Brian shows up every day wanting to get better, and has a really positive outlook which is infectious on our team — and is especially important for a goalie. We are really lucky to have him. His perseverance through his serious shoulder injury to becoming the most winning starting goalie in our soccer program’s history is remarkable enough. He comes from a great family, which has formed him to becoming a great role model for our team — personally and athletically.” 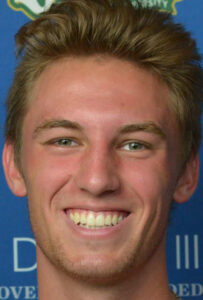 The oldest of George and Meg Gaughan’s six children, Brian played baseball and soccer for the Hillers. The lefty pitcher and first baseman considered playing baseball in college, but found his best overall fit at Franciscan, which had no varsity baseball program.

Whether sitting injured or starring in the goal, Gaughan has enjoyed his Franciscan soccer experience.

“You spend so much of your time with your team in college you get super close to your teammates as you do everything together,” he said. “The players at Franciscan are also just some of the best guys you’ll ever meet.”

The team chemistry on and off the field led to a successful season.

“We had one of the best seasons in Franciscan soccer history,” Gaughan said. “We were playing a new style of soccer as we graduated our All-American striker last year. Within this new style that focused on more points of ball control and attack we also had a lot of really good freshmen step up and play well. We were focused on trying to build a Franciscan brand of soccer.”

Bobak sees Gaughan as a major part of that brand.

“We are really excited that Brian has two more years with us,” he said. “Continuity with the goalie position is very important. I’m excited to see Brian even get better than he already is — and to lead our team on and off the field. The last three years we have increased our winning total — and we look forward to continuing that and seriously competing for an AMCC conference championship and NCAA tournament berth.”

With an eye on helping build the soccer team’s success, Gaughan may also return to another familiar sport, since Franciscan is restarting a baseball program.

“I may think of playing if works with my schedule,” he said. “It would be a lot of fun to play baseball again.”

Overall, the sophomore considers his time in Steubenville a win.

“I have had an amazing experience at Franciscan University,” the biology major said. “Athletically, academically and socially, it has been a great experience.”