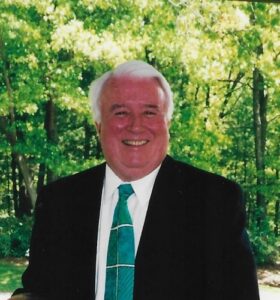 George R. Bailey, D.D.S., 82, a retired Framingham dentist, passed away peacefully at his home in Upton surrounded by family on March 19.

Son of the late George F. and Ruth Ann (Kerrigan) Bailey, George was born in Worcester. George spent time during his childhood in Worcester and Clinton and graduated from St. John’s High School (Temple Street, Worcester), Class of 1956. He achieved his undergraduate degree from Mount St. Mary’s University and his Doctor of Dental Surgery degree from Georgetown University School of Dentistry. In 1964, Dr. Bailey opened his dental practice on Lincoln Street in Framingham. Dr. Bailey proudly served our nation as a captain in the U.S. Army Dental Corps during the Vietnam War. He returned home safely to continue his career in private practice for the next 30 years until retiring. In addition, Dr. Bailey served as the dental director for Parameter Health Center, St. Patrick’s Manor and Middlesex Manor Nursing Home.

He was happiest in the company of his family, traveling to Naples, Florida, during the winter months with Wendy, spending time in Kennebunk or tending to his prized flower and vegetable gardens. George was a lifelong and faithful parishioner at St. Bridget’s parish in Framingham for 45 years and a parishioner of St. Matthew Parish in Southborough for the past four years.

Calling hours will be held from 4-7 p.m. on Wednesday, March 24, in the Philbin-Comeau Funeral Home, 176 Water St., Clinton. A Mass of Christian burial will be celebrated at 10 a.m. on Thursday, March 25, at St. John the Evangelist Church, 80 Union St., Clinton, with burial to follow in St. John’s Cemetery, Lancaster. Memorial contributions may be made in memory of Dr. George R. Bailey to: St. John’s Food for the Poor Program, 44 Temple St., Worcester, MA 01604 or St. Johns High School, 378 Main St., Shrewsbury, MA 01545 (stjohnshigh.org/support).