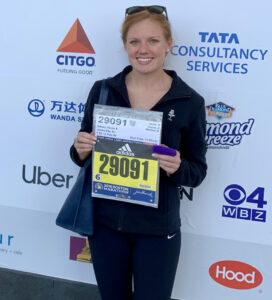 Hopkinton native Devon Gibney will run the 2022 Boston Marathon to support the charitable efforts of the Hopkinton Women’s Club.

Devon Gibney personifies two aspects that make the April 18 Boston Marathon a very special race. The Hopkinton native is running for the Hopkinton Women’s Club as the race marks the 50th anniversary of the first official field of women runners — eight athletes who competed in 1972.

“How symbolic is it, that I get to run in support to of the Hopkinton Women’s Club this year,” said Gibney.

Additionally, this year’s race is the first since 2019 that is being run on Patriots’ Day. Gibney ran her first Boston Marathon in 2019 and is running her second this year. She also has run marathons in Philadelphia and New York City but notes, “Nothing compares to the feeling of running in Boston, it has always been on my bucket list.”

As a youngster, Gibney said, she and her siblings “would be up early on Marathon Monday to get a good spot along the course so we could cheer on the runners. There was always so much excitement in town.” This year, her parents, Jim and Kathy, along with other family members and her husband, will attend the race to cheer her on.

Gibney, who now calls New York City home, always has been a competitive person. During her years at Hopkinton High School she was a standout lacrosse player who was recruited to play the sport at Quinnipiac University and was named team captain. Also at Quinnipiac, she was asked by the coach to be on the golf team. Following graduation she turned to running. “I love to run, and that is why I chose to get into the marathon,” Gibney said.

Since she received her race number in late January, Gibney has been training by running throughout New York City, especially Central Park, so she can build up her stamina for the hills she will face on April 18.

“My husband rides his bike with me as I do my longer weekend runs. He acts like my trainer and carries the water bottles, too,” said Gibney. They also visit Hopkinton occasionally so she can practice running the course.

Gibney’s first Boston Marathon was in support of the Hopkinton Senior Center. Doris Early, who had helped Gibney get the Senior Center bib in 2019, was among the women who helped her to get the one for the Women’s Club this year.

“It really is a small world, some of the women who helped me get the bib knew me from high school,” said Gibney, noting one woman was her high school guidance counselor. “I feel honored and excited to be running for them.”

As Gibney says on her fundraising webpage (GoFundMe.com/f/devons-boston-marathon-run-for-the-womens-club), “This group of women and their initiatives provide meaningful community outreach that quietly improves the lives of many in the Hopkinton community. Many of the women involved in this organization supported me while I was a student in Hopkinton, and it is my privilege to give back.”