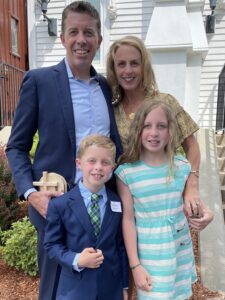 Rachel Gilbreath, shown with her family, is a veteran of six Bostons, but she hasn’t run the event in a decade.

Rachel Gilbreath thought she had hung up her marathon shoes for good, but she’s putting them back on thanks to a challenge issued by her husband, Keith.

Hopkinton Youth Boys Lacrosse president Ed O’Donnell ran into the couple last fall and asked whether Keith, an accomplished distance runner, would be interested in running the 2022 Boston Marathon to benefit the lacrosse program.

“My husband looked at me and said, ‘Hey, do you want to do this?’ ” Gilbreath said. “I got so mad at him, because he knows I love running and I can’t turn down a challenge, so I accepted.”

So Gilbreath found herself training in the dead of winter to run a distance she had not attempted since 2009. But she is no rookie when it comes to marathon running. Gilbreath grew up with a love of running instilled in her by her father, who also ran marathons.

“I got into running because of him and trying to beat our family record,” she said. “Before I got married I ran about 15 marathons and I have run two since I have been married. I just stopped because of the time commitment, I work full-time and I didn’t have time to train.”

This spring will mark Gilbreath’s sixth Boston Marathon. Her solid distance running base has made the training a little bit easier, but she referred to the time since her last race with a laugh, saying, “10 years makes a big difference.”

Still, she ran a half-marathon last fall and has been slowly building up her mileage and cross training.

“I did 18 miles [on a recent] weekend and that was no joke,” Gilbreath said. “I am just trying to take it easy. I am not going to win the race. In previous marathons I was super competitive.”

Gilbreath’s personal best marathon time was set on the Boston course, though she said she likely will not approach that mark this time around. But her husband and their two children, Lucy, 10, and Bennett, 8, are excited to see mom tackle 26.2 miles again.

“They think it’s awesome, they still can’t believe I am doing it,” she said. “They will get to watch Mile 1 and then head into Boston.”

Gilbreath said she is looking forward to experiencing Boston again.

“If you are into running and into running marathons, then you definitely want to run Boston sometime in your life,” she said. “The fans are just packed the whole way into Boston and, even as I get a little nervous about running that distance again, the fans are what keep you going.”

Gilbreath is excited for one fan, in particular, her 80-year-old father, Jim, who, despite battling Parkinson’s disease, is traveling to Boston with his caretaker to see her on race day.

“He is my absolute hero,” Gilbreath said, although she did ultimately beat his best marathon time.

“I married a fast guy, so he annihilated my record,” she said. But, referencing her maiden name, she added, “I have the record for the Del Mauro family.”