Gittlen’s Marathon cause is for paws 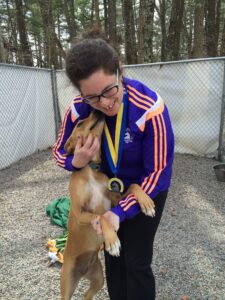 Sandra Gittlen, a longtime volunteer at Baypath Humane Society, is running to raise funds for the Hopkinton animal shelter.

Sandra Gittlen started running at the age of 41 while struggling with a rare autoimmune disease.

“I wanted to feel better and counter the effects of treatment,” she recalls.

When she decided to participate in the Boston Marathon, Gittlen discovered she could combine exercise with her passion for animal advocacy and raise money for Baypath Humane Society of Hopkinton.

After adopting two cats from Baypath, Gittlen had started volunteering in various capacities — first doing whatever was necessary, such as cleaning and feeding, then later helping with the organization’s social media outreach. A writer and editor by trade, she wrote donor appeals and the organization’s newsletter. Eventually, she also did adoption counseling.

Along the way, she expanded her furry family: Five of her six pets have been adopted from Baypath (the sixth also is a rescue).

She’s been an integral part of Baypath for 12 years now, serving on the board of directors for seven years. She also chaired the Development Committee, and says she loves fundraising. Gittlen has raised nearly $50,000 for Baypath through the Boston Marathon.

Running the event has come with its share of challenges. Her first experience was in 2013, the year of the finish line bombing. “Strangely, it helped me to bond with the running community; I had more affinity for the Marathon after everything that happened,” she reflects.

This will be Gittlen’s sixth Boston Marathon. “It would be my seventh, but I couldn’t run in 2017 because I broke my foot!” she shares. “And then in 2018, we ran during a monsoon.”

Despite, or perhaps because of, such obstacles, Gittlen is inspired by participating. She also appreciates the cheering. “When you come around the bend at Boylston Street, toward the arches, and the people are all going crazy screaming … it’s like nothing you’ve ever experienced!” she said.

Gittlen says the 2022 Marathon will be a special one, as she’ll be running with a close friend who is battling cancer.

“She’s a powerhouse; I’m feeding off her strength and energy!” Gittlen remarks with admiration. “This is a great experience to share with a friend. The focus this year is on victory — on finishing the race. It’s about being healthy, about doing our best and having fun doing it! Just really celebrating life.”

She counts many benefits: supporting and spending time with her friend, who will be raising money for cancer research; continuing to build and sustain her own physical and emotional health; and raising funds for animals who desperately need assistance.

She recalls adopting her dog, who was a local surrender. “She was so full of fear and anxiety, but because of the help she got from Baypath, she is thriving, and she’s very loving.

“She’s living her best life — and Baypath cared enough to save her. For me, that’s the motivation: I get to be part of it.”