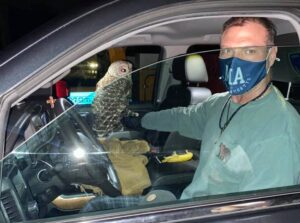 Clifford Kistner found the injured owl on the side of the road and enlisted help from the police in getting the bird to a veterinarian. PHOTO/WESTBOROUGH POLICE FACEBOOK

Former Hopkinton resident Clifford Kistner was driving near the Hopkinton/Upton line Jan. 3 when he saw something troubling.

A vehicle ahead of him struck a bird, which then bounced off the windshield and landed, flopping and apparently disoriented, on the side of the road.

Kistner immediately swooped in to help the injured animal, which was determined to be a barred owl.

His dogged efforts, along with the skilled rehabilitation work of Tufts Wildlife Clinic at Cummings Veterinary Medical Center in Grafton, transformed what could have been a tragic ending into a new start for the bird.

But that happy ending was far from certain when Kistner first saw the injured bird. He worried that the confused owl would return to the roadway, where it could have been struck again with potentially devastating results.

Kistner pulled over his car, grabbed a pair of gloves from his vehicle and carefully captured the bird. He then wrapped the owl in a jacket and kept driving.

He encountered Westborough Police Officer William Ethier conducting radar on Upton Road. Kistner drove to the cruiser, a feathered passenger by his side. Ethier “was shocked to see an animal in my vehicle,” Kistner recalled.

Ethier contacted Westborough animal control officer Melinda MacKendrick, who, along with Ethier, escorted Kistner to Tufts for the owl’s evaluation and treatment. 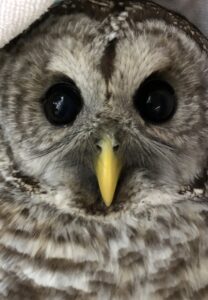 The rescued owl, shown just before it left the Tufts Wildlife Clinic to be released, suffered head trauma and injured its right eye when it was hit by a car. PHOTO/TUFTS WILDLIFE CLINIC

The owl had suffered head trauma similar to a person suffering a mild concussion, said Dr. Maureen Murray, director of the wildlife clinic at Tufts.

“It’s not uncommon to see this type of injury in owls, particularly in the winter,” she said. “They hunt at night and tend to swoop down across the road as they’re hunting and end up colliding with a car.”

Within a few days, the owl had perked up, indicating that its head trauma and the eye were improving.

The owl was transferred Jan. 19 to a large flight barn for observation, before being returned to the wild Jan. 26.

“It’s always uplifting to be able to release wildlife back to their natural habitat, so we were happy this owl was able to get back out there,” she said.

Kistner attended as the bird he rescued was released at Whitehall State Park in Hopkinton.

The event was special for Kistner, who said he bonded with the bird. “The ecosystem and the earth and all it encompasses is very, very important to me,” he said.

Kistner, who lives in Upton after spending many years in Hopkinton, is developing Eagle’s Nest Tree House Resort in North Carolina, which he said will be the largest tree house resort in the world and which he hopes will reflect his respect for nature.

At one point during its release, the owl flew 50-75 feet above Kistner’s head. “My wish was that the bird would recognize me and come to me, flying by me as if it was saying goodbye,” he said.

As Kistner watched, the owl headed to the lake, grabbed something off the ice and apparently ate it.

Then the owl flew off, toward the area where it was rescued.

“It was an absolutely beautiful release,” Kistner said.

“The owl was lucky to be found soon after it was hit, and its rehabilitation went relatively smoothly,” she said.

Reports of owls in distress are not unheard of in Hopkinton, animal control officer William Proctor said. He has responded to a barred owl struck by a vehicle and even a great horned owl stuck in soccer nets.

He urged people to call police if they encounter injured or distress animals. Wildlife can be dangerous, even when they are injured, Proctor said.

“We don’t want to see anybody get hurt,” he stated.

As a result of the incident, Kistner said he has received thank you letters and gifts of owl images. In a time when many people are struggling emotionally, Kistner said he is “very grateful that people took such an emotional grab” to the rescue.

For more information about what to do if you find injured or abandoned animals, visit wildlife.tufts.edu/found-wildlife/.