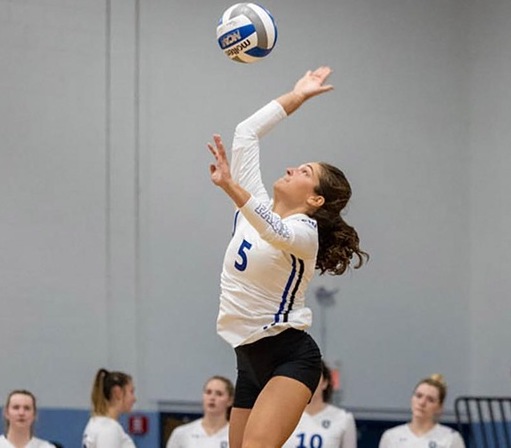 A position change earned Angie Grabmeier more court time for Bentley University’s volleyball team this fall, and the Hopkinton native helped the Falcons capture 23 victories during a successful regular season and secure a berth in the Division 2 NCAA tournament.

“We started off strong this year,” Grabmeier said. “We had a tournament at the beginning of the year and we won every game we played. I think we had a really strong team this year.”

Bentley finished the regular season 23-5 before being upset in the quarterfinals of the Northeast-10 tournament by Southern Connecticut State. The Falcons earned the No. 3 seed in the NCAA tournament’s East Regional before losing a four-set match to Southern New Hampshire in the opening round on Nov. 17.

Grabmeier, a junior, said her season started a little slow until she moved from defensive specialist to her natural setter position.

Grabmeier had been setting since middle school and throughout her career at Hopkinton High, so she said she was happy to switch spots.

“I proved that I was able to do well and I started the next few games,” she said. “That was exciting. I was happy I finally got the chance to show what I can do and what I was working on. Once I proved myself, I was able to start.”

Grabmeier said she is more comfortable as a setter.

“I like it better because you have more control over the game,” she said. “You’re a decision-maker and you get to make the plays. I feel like I am making more of an impact on the team. I know what plays will be good in the moment, because I have been doing it my whole life.”

Grabmeier played in all 30 matches during the season and saw court time in 96 sets. She finished third on the team in assists (138) playing in Bentley’s two-setter system.

Her success at Bentley follows a stellar high school volleyball career playing for her mother, Margie. Grabmeier was Hopkinton’s captain during her senior year and earned various all-state and all-region honors, along with being named the Tri-Valley League’s most valuable player. Grabmeier helped the Hillers to four TVL titles and a spot in the Division 1 Central/West final during her career.

In addition to enjoying the chance to play more this fall, Grabmeier said a highlight for her is how well the tight-knit Bentley squad has played from the start of the year.

“We had a bunch of returners and we had a feeling that it was going to be a good year,” she said.

Grabmeier said she wants to continue to work on getting better on the court and building the relationships she has established with her teammates, many of whom she said will be lifelong friends.

“I just think it’s really cool that I get to play volleyball in college,” Grabmeier said. “Not a lot of people get that opportunity. I love the sport, so it’s been great to keep playing.”