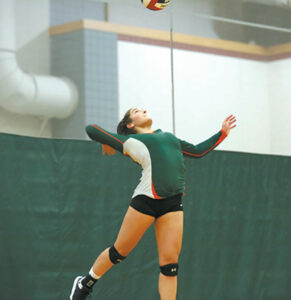 The HHS volleyball team lost some major talent from last year, but Angie Grabmeier (serving) and Morgan Allen are among the returning players looking to extend the team’s streak of five straight league titles.

After a stellar 2018 campaign, the Hopkinton High School girls volleyball program brings several returners to a team trying to replace the stellar attack that led the Hillers to a dominant season last fall. 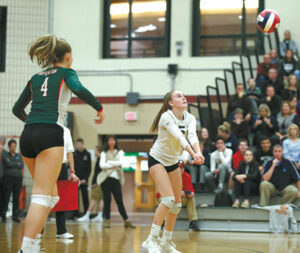 HHS concluded last year’s run in the sectional semifinal with a loss to Franklin. The Hillers posted a 17-1 record in the regular season and finished 19-2 overall, but graduated five senior starters. The result is a 2019 group that has not been on the floor together as much but is still keeping its sights set high.

“This is the first time many of these players have played together on a team, but all of the players have a lot of volleyball experience and are strong competitors,” said Hopkinton coach Margie Grabmeier. “The energy is positive and expectations and goals are high.”

Among the top players a year ago who have since moved on to college are Bella Onsi, who garnered all-state recognition and was the Tri-Valley League’s Most Valuable Player. Fellow TVL All-Star Jenna Willwerth also played her final season with the Hillers in 2018.

“We have to replace that offensive firepower this season,” Grabmeier said.

Senior Angie Grabmeier (the coach’s daughter) is back to quarterback the offense, and right side hitter Ashley McDermott and libero Morgan Allen are two more experienced seniors on this year’s roster. The Hillers also have a trio of returning juniors with setter Rachel Leeret and hitters Cate Cestari and Millie Senseney.

A number of other players will compete for playing time this fall. The group includes junior hitters Cassie White, Cadyn Boyce and Mirabella Paolucci, along with junior defensive specialist Hannah Quinlan, and sophomores Kate Powers, Melanie Gildea and Sam Berenson.

“They are bringing incredible energy and enthusiasm, combined with considerable skills to the court,” said the elder Grabmeier. “Plus we have the two best managers in the state, seniors Keelan Boyle and Jaimie Hart.”

As Hopkinton makes its way to the season opener, a home match set for Sept. 4 at 6:30 p.m. against Medfield, the coach said the team has a number of goals both on and off the court, including “dedication to hard work, a focus on sportsmanship, team bonding on and off the court and making a strong push in the post season.”

Hopkinton will also look to make it six league titles in a row, but Grabmeier said the run could not continue if her team did not respect the quality of the TVL squads it will face this fall.

“The TVL is a strong league with most teams qualifying for post season each year, to underestimate any league foe would be a mistake,” Grabmeier said. “We’ve been TVL champions the last five years, so we expect to see each opponent’s best game every time we play them.”