Greyhound Friends set to open, but on short leash 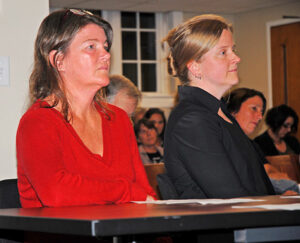 Greyhound Friends kennel manager Terri Shepard (left) and president Caryn-Amy Rose appeared at a public hearing before the Select Board on Sept. 10 and agreed to conditions requested by the board designed to avoid a repeat of past issues.

Greyhound Friends is out of the proverbial doghouse, but the town’s Select Board made it clear that the organization is on a short leash as it returns to the business of saving dogs.

The kennel, located on Saddle Hill Road, has been closed since early 2017, when the state issued a cease-and-desist order and the town followed by revoking its license.

Following a turnover of leadership — although critics say the turnover was not as complete as it should have been — Greyhound Friends was issued a new license by the town last month, and the Department of Agricultural Resources lifted its cease-and-desist order two weeks later, after the kennel passed another round of inspections that proved it had made the required physical alterations and improvements.

However, a citizens petition organized by resident Beth Malloy led to a public hearing on Sept. 10. 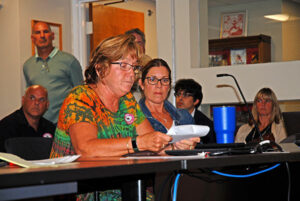 Hopkinton resident Beth Malloy, who organized a citizens petition that led to a Sept. 10 public hearing, expressed frustration with Greyhound Friends leadership and requested a revocation of the organization’s license.

Malloy accused Greyhound Friends of misleading the town in its license renewal application and failing to accept responsibility for previous mistakes. She said it’s “past ridiculous” that the organization is getting yet another chance.

“Due to these misstatements and misrepresentations in the kennel license application letter, in addition to the decades of animal welfare violations and poor decision-making by this organization, we feel that the kennel license should be revoked,” Malloy told the Select Board.

Malloy called for the dismissal of new kennel manager Terri Shepard, who has been a volunteer at Greyhound Friends for many years and served on the organization’s board shortly before the kennel’s closing in 2017.

“We believe if they were ever to get out from under the shadow of animal neglect they will need to get rid of these people who stood silently by while this happened,” Malloy said.

Caryn-Amy Rose joined the Greyhound Friends board in October 2017, eight months after the kennel was closed, and was elected president a year later. There are four other board members, and Rose said all of them had limited — if any — interactions at the kennel prior to 2017.

“We have a new board ever since the kennel was originally closed in February 2017,” Rose stated. “We have achieved a new culture with emphasis on quality of care for each individual dog in our shelter.”

Rose promised there would not be a repeat of the issues that occurred under the watch of founder and longtime executive director Louise Coleman, who under an agreement with the attorney general’s office cannot be a part of the new Greyhound Friends.

“Those of us who joined the organization after its closing gradually realized that while good was being done for many dogs through the shelter, other dogs’ needs went unmet in the past.

This is a sad fact,” Rose said. “We are deeply sorry about the failures of Greyhound Friends past. The best of intentions are not good enough. We have put in place systems, methodologies, safeguards and above all, professional collaboration and openness to guard against human error and blind spots in the future.”

Rose said in her occasional visits to Greyhound Friends prior to 2017 she never saw anything concerning. Others did, however, and left the board or stopped volunteering when their complaints were not adequately addressed.

“I do apologize for not hearing people who told stories and dismissing that just because I had never seen anything,” Rose said.

Shepard, the new kennel manager, also acknowledged mistakes were made, but she said she’s focused on moving past them.

“I am sorry for the things that happened before and after the kennel closing and the changes in leadership, but now we’ve been able to fulfill all those needed changes,” Shepard told the Select Board. “When the kennel closed in 2017 until now I have worked with the board in collaboration with authorities and outside professionals to identify every mistake, problem and infraction, analyze what went wrong and create solutions both physically and procedurally to be able to operate correctly in the future.”

Shepard said the main issues occurred when the kennel decided to accept different breeds and took in more dogs than it could handle.

“There were too many dogs,” she said. “There was not enough staff. Things were declining.”

Ultimately, the Select Board decided not to revoke the license, but it placed two conditions on the organization.

The first is that no board member who served prior to Greyhound Friends’ closure in 2017 can return to the board without the prior approval of the Select Board.

The second is that Greyhound Friends must take all reasonable steps to prevent Coleman from being present on the kennel property, including taking legal action if necessary.

Select Board chair Brendan Tedstone also warned Greyhound Friends that it was “going to be under a microscope” and would be dealt with harshly if new violations were discovered.