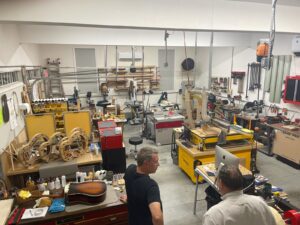 Patrick Morrissey builds guitars from his shop in his Hopkinton garage. PHOTO/MORRISSEY FAMILY

Most people have jobs that give them an income; others have careers that provide satisfaction. And then there are the lucky few, like guitar craftsman Patrick Morrissey of Hopkinton, whose work is his passion.

“It has been fantastic to focus on something I really love doing,” said Morrissey, speaking about what started as a hobby about two decades ago and has been his career for the past 15 years.

His interest in the craft began when he was in his mid-30s and wanted to learn to play the guitar. After taking lessons, his interest shifted from making music to creating the instrument, the “wood being,” that could make such beautiful sounds.

Fine woodworking was part of Morrissey’s life from a young age. “My dad was always a woodworker, who started in construction and moved onto furniture making as he got older,” he said. “I wanted to be by his side when I was a kid, so I got involved, becoming his number one helper as a teen.”

With his background, Morrissey thought he could easily learn to make a guitar. He soon realized he needed to know more, so he took some classes at Thomas Knatt’s luthier workshop in Concord. “After a couple of lessons, I was hooked on the craft,” said Morrissey.

Being a luthier — a maker of stringed instruments — combines many of his talents and interests. “It takes fine woodworking skills, sound physics to achieve the right tones, geometry to make sure the instrument plays correctly and art,” which Morrissey said came from his earlier career in graphic design. “All these different aspects keep me very motivated,” he said of his fascination with guitar making.

Another bonus of his work is collaborating with the musicians and collectors who buy his individually crafted instruments. “Their talent always amazes me,” said Morrissey. “To be part of their creative process by building them a guitar that inspires their music, their passion is extremely rewarding.” 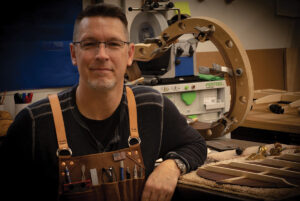 Patrick Morrissey has made guitar building his career for the past 15 years. PHOTO/MORRISSEY FAMILY

The process starts with a consultation between Morrissey and the client. “Some people know exactly what they want, so the process goes quickly,” he said. “Others need some coaching. They have an idea of how they want it to sound in the end, so I try to guide them based on my experience toward what they are looking for.”

Morrissey, whose company’s website is MorrisseyGuitars.com, usually takes about 200 hours to create a guitar, which can cost between $6,000 and $15,000. The time can be condensed to a few months or spread over a year, depending on how quickly a client decides on the woods used in the instrument — spruce, redwood, walnut or exotics — which give it its tone and look, its style, its finish and other components.

Once the guitar is crafted, Morrissey and the client meet for one of the most critical elements of the process, the setup. “If they are local, they stop by my workshop to try out the instrument,” he said. “I set the string height, which has a very tight tolerance geometry, and do any other tweaks. It all depends on their playing style and their music. If a client is further away, they can send the guitar back to me for any tweaks.” Most of the changes are very subtle, based on how the instrument works for a musician once it is in their hands.

Another benefit of the business for Morrissey is crafting in his home-based workshop located in the family’s Hopkinton garage. Moving to town about three years ago from Charlton, he and his family love being part of the community. And Morrissey is using another of his talents this fall. A former professional soccer player, he is coaching the freshman boys team at Hopkinton High School.

“It is amazing how everything has aligned for me,” said Morrissey of his craft. “It is rewarding to experience something I created come alive, to hear music come from it.”