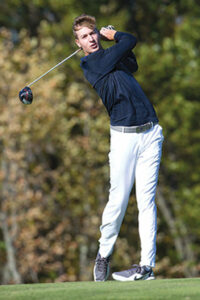 Hopkinton’s Jimmy Hervol capped his stellar UConn career with a trip to the NCAA tournament this spring.
Photo/UConn Athletics

Hailed as perhaps the best golfer in UConn history, Hopkinton native Jimmy Hervol finished a stellar collegiate career with a trip to the NCAA tournament and now has the professional circuits in his sights.

Hervol won a pair of tournaments during his time with the Huskies and fired a 64 in a match at Clemson this spring, but now his focus is on turning the sport he loves into a career.

“I want to play professional golf for a living and never have to do anything else for a job,” he said.

That goal is a reasonable one for the three-time American Athletic Conference all-star. Known for massive 330-plus-yard drives and stellar control with his iron play, Hervol’s UConn career has been filled with highlights that have observers saying he will be ready for the next level.

“I think if he cleans up some short-game work, he could play for big-kid checks for sure,” UConn coach Dave Pezzino said. “He’s not far off when you look at player development. He’s gotten better every day, he’s so coachable and he shows zero emotion out on the golf course, which is huge. He really doesn’t let things rattle him.”

Hervol agreed, saying his ability to keep an even keel has been vital.

“My mental game is a lot stronger, that’s what has helped me the most,” he said. “I have grown more mature with my decisions, and maintaining a level head out there is huge.”

The Hopkinton High School graduate won a pair of tournaments at the college level. One of them, at Bethpage State Park in New York at the 2016 Doc Gimmler Invitational, a win that earned him AAC Player of the Month honors. Hervol said he didn’t know he was in the lead until the tournament had finished with him atop the leaderboard. A more taxing win came during the 2018 FAU Spring Championship.

“I led wire to wire, so that was a stressful tournament,” Hervol said. “Holding on to the lead for three days was difficult.”

Another highlight for Hervol was shooting a 64 this spring at Clemson, tying his personal best.

“That was a big point in my career,” he said. “It proved to myself that I could play against some of the best in the country.”

Hervol started playing golf when he was about 8 years old and started competing at around age 12. His home course, Hopkinton Country Club, is where he honed a game that allowed him to become a two-time Tri-Valley League MVP and four-time league all-star.

After the NCAA tournament, which was scheduled to start May 13 at the University of Louisville Golf Club, Hervol plans to spend the summer playing in amateur tournaments and continuing to refine his game. He got off to a good start when on May 6 he finished second with a 2-under-par 70 at a U.S. Open local qualifying tournament held in Middlefield, Connecticut, advancing him to the sectional round on June 3.

The next stop is qualifying school for the Web.com Tour, the developmental tour for the PGA Tour. He also is graduating UConn with a finance degree, which he calls “a nice backup.”

The primary plan is taking his golf game to an even higher level.

“I want to continue to improve my putting and wedge play, that’s how the PGA Tour pros make their birdies,” Hervol said. “Figuring out how to be more consistent will be a huge help for me.”