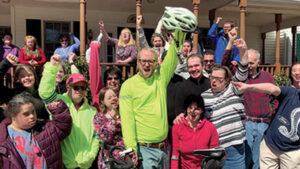 Dan Cloutier (with helmet) celebrates his 100-mile charity bike ride with members of the Michael Lisnow Respite Center in Hopkinton.

A local man turned a milestone birthday into a way to give back in miles to a community that has given him so much joy.

Dan Cloutier, a former Hopkinton resident who now lives in Upton, turned 40 years old on May 2. When reflecting on how to celebrate the big day, Cloutier decided to combine two of his passions — bike riding and his work at the Michael Lisnow Respite Center in Hopkinton.

The Michael Lisnow Respite Center is a location that provides emotional and physical support for individuals with disabilities and their families including respite care, daycare and an adult day program.

Cloutier has worked at the center for the past 17 years, starting as a music teacher and currently working as an administrator. Although his job title has changed a few times over the years, the center has always been a place that has felt like a second home to him.

“I fell in love with the center’s mission, heart, but most importantly the people,” he said. “Every morning I get to go to a job where I feel loved.”

Cloutier has worked over the past five months organizing the 100-mile fundraising ride that began in Upton, traveled though Colt State Park in Rhode Island and ended at the Respite Center. Setting out with a lofty goal of trying to raise $8,000 for scholarships to pay for respite hours and day care for families in need, Cloutier sent out a plea to family and friends to contribute as a birthday present for his big day.

When May 2 arrived, Cloutier hopped on his bike already knowing that he had far surpassed his fundraising goal, bringing in over $12,000 for the Center.

“People got really excited about this charity,” Cloutier said. “All of the money goes to families who just can’t afford respite care.”

Although the ride was smooth and the weather was warm, the best part of the day was the greetings that he received from loved ones at the halfway point and the ending of his 106-mile journey.

“There was a huge group of about 50 people waiting for me at the end of the ride,” he said. “It was super fun and they surprised me with a birthday cake, too.”

Cloutier hopes that the success of the fundraising bike ride will lead to an annual event to help families in need.

“I have had a lot of people approach me about joining in to do this as a team,” he said. “It goes to show that this has the support of a really great community.”