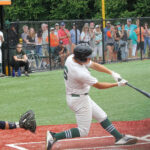 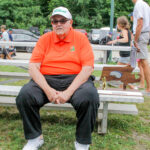 Dick Bliss sits with the runner-up trophy after the HHS seniors presented it to him. PHOTO/JOHN CARDILLO 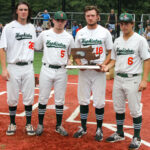 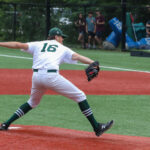 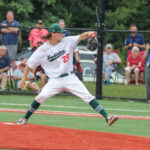 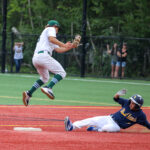 Cam Jerrett leaps for a throw from the catcher but is too late to nab the St. Mary’s base-stealer. PHOTO/JOHN CARDILLO 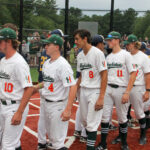 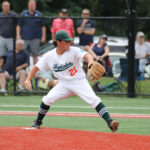 “Our motto is, ‘Take care of the ball,’ ” mused Hopkinton High School baseball coach Steve Simoes, minutes after a frustrating 5-2 loss to St. Mary’s of Lynn in the Division 2 state championship game Thursday afternoon on the HHS turf field.

The fact that the winning run scored on a wild pitch, with an insurance run scoring on an error on the same play, made the loss tougher to take. Additionally, St. Mary’s first run came on a bases-loaded walk and its second scored shortly after an error on a potential double-play grounder.

Give a good team that many chances, and it’s not likely to end well.

“This is the first game all year we [struggled so much on defense], Simoes said. “I attribute a lot of that to nerves. And I fully understand that. But very few kids get the chance to be nervous, having that experience [of being in a state championship game].”

Two years ago, HHS also lost the state championship game to St. Mary’s. That time, the Hillers could only muster one hit and fell 2-0.

This time it was a much different kind of game. First off, due to changes caused by the pandemic, Hopkinton hosted the game, which normally is played at a neutral site. About 1,000 fans turned out to watch, lining both sides of the field and clumping around the outfield.

The fans were fired up early on, after HHS starting pitcher Vinnie Purpura, a junior left-hander, showed poise in settling down to escape further damage after walking four batters to force in a run.

The Hillers answered immediately against St. Mary’s junior right-hander Aiven Cabral. In the bottom of the first, Conor Kelly walked, Ronnie Shamus smoked a ground-rule double that one-hopped the fence in left, and Dylan Locke followed with a two-run single to left. After Nick Paharik singled to center and stole second base, Hopkinton had runners on second and third with none out. However, Cabral shut the door, sandwiching a pair of strikeouts around a soft liner to short.

Hopkinton would not score again. Meanwhile, St. Mary’s tied the score in the third on a sacrifice fly, two batters after an error.

In the fourth, the Spartans had the bases loaded with two outs. Tad Giardina then scored from third a wild pitch, and the catcher’s throw to home got past Purpura, allowing Dante D’Ambrosio to race home and make it 4-2. Terence Moynihan followed with an RBI single to center for the final tally of the day.

Hopkinton had allowed only four runs combined in its four previous tournament games this season. Four innings into this one, and the Hillers had surrendered five.

Junior right-hander Michael Burney was summoned to relieve, and he delivered two shutout innings, followed by 1 1/3 scoreless innings from Kelly.

Hopkinton’s bats were mostly quiet the rest of the afternoon against Cabral and sophomore right-hander John Nowicki, who got the final two outs. A leadoff walk was erased by double play in the fourth. The Hillers left a pair on base in the fifth, went 1-2-3 in the sixth, and managed just a walk in the seventh.

Looking past the disappointment of the day, Simoes appears to have built something special here, with the Hillers now finishing second in the state two tournaments in a row (last year’s season was canceled due to the pandemic).

“We’ve always just tried to play with character and try to do the right thing,” the coach said. “This was an interesting year because it was a missing year of leadership, not having played last year. Normally the seniors do more coaching than I do, pass down the tradition. This group is great. Because the conditions were hard we got the most out of our ability, and I attribute that to high-character kids.”

Following the trophy presentation, the Hillers seniors carried their award to the stands behind home plate and presented it to Dick Bliss, who coached multiple sports at the high school for decades, most recently golf, before retiring after the 2019 season. Bliss’ wife recently passed away.

“We dedicated it to Coach Bliss. Unfortunately we gave him the runner-up trophy,” Simoes said. “He is what high school sports is all about.”