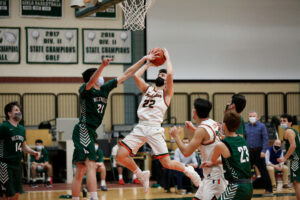 Hopkinton High School senior Brian Keefe tries to force his way past a Westwood defender during a Jan. 12 game in Hopkinton. Two days after this game, all Hillers sports were forced to take a one-week break due to a surge in COVID-19 cases in town. PHOTO/TRICIA LACASCIA PHOTOGRAPHY

The pandemic has impacted the Hopkinton High School athletics program significantly this winter and, like his fellow coaches, boys basketball coach Tom Keane is doing his best to roll with the punches.

The Hillers played three games before the need for COVID-19 contact tracing at the high school interrupted the schedule. Hopkinton had to shut things down for six days. Suddenly, a coach who only until recently eschewed the need for a cell phone was leading film sessions over Zoom.

“Like a lot of people, Zoom was not something I had used much before this season,” Keane said. “But we weren’t allowed to hold any practices or anything like that, so we did a lot of film work looking at the first three games.”

The newly tech-savvy coach used an app called Hudl to help break down the game film and look at different aspects of his team’s performance, both the good and the stuff that needs improvement.

But no technology could substitute with old fashioned hard work when it came to staying in shape over the layoff.

“I left it up to them to stay in shape,” Keane said. “I told them to get on a treadmill or get outside and run. We had our first practice [last] week after the six-day layoff and I was surprised at how well they kept their basketball condition. I was worried they would be a little out of shape.”

The season was scheduled to continue this week with games against Medfield. Hopkinton also has two scheduled contests against Westwood remaining but, as is the case with everything else this winter, things could change. Keane is hopeful that athletic director Rich Cormier will be able to find more games for his team to play.

The Hillers may play Ashland, which started the season late, and there is talk about a game against Holliston as well.

“It’s a fluid situation,” Keane said. “Rich is doing his best to get us as many games as possible.”

Hopkinton posted a 1-2 record through the first three contests. A furious comeback from an early14-point deficit in the opener at Norwood came up just short before the Hillers got the better of the Mustangs in a rematch. Hopkinton then dropped a game to Westwood before the pandemic-induced hiatus.

Senior captains Matt Cooper and Brian Keefe have been mainstays for the team in the backcourt, along with junior point guard Nate Kasper, who Keane said has emerged as a team-leader from that position. 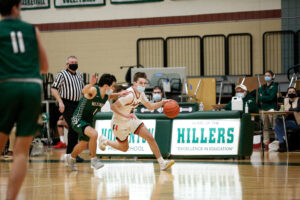 Junior Nate Kasper has developed into a reliable point guard for the Hillers. PHOTO/TRICIA LACASCIA PHOTOGRAPHY

On the inside, senior forwards Anthony DiPietro and Josh Czerepuszko have led the way.
“They have had some big games for us over the first three,” Keane said. “All of the seniors have done a great job in a tough situation. They are leading this team and I’m really happy to see that.”

Keane also praised his team’s adaptability, noting it has taken the form of staying in shape through the pause to getting used to playing wearing a mask. He also is trying to instill the ideas of controlling what they can control and treating every game in the limited schedule as if it were a tournament game.

“We want to make this the best experience we can,” Keane said. “Sometimes you have seniors play above their heads because they know this is the end for them, so we have tried to tell them to take every game like it’s a state tournament game and go out and give it 100 percent every single time.”