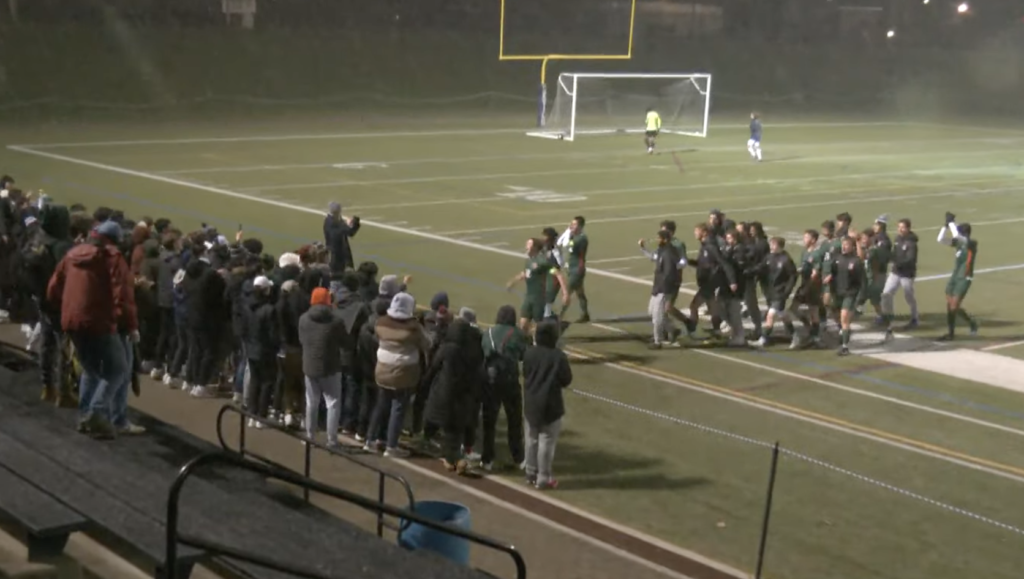 Hopkinton High School players make their way over to their fans after beating Bedford in the state semifinals. PHOTO/HCAM SCREENSHOT

The Hopkinton High School boys soccer team survived a late charge by Bedford to hold on for a 4-3 win in Tuesday’s Division 2 state semifinal, setting off a celebration amid falling snow in Leominster.

The Hillers improved to 19-1-2 on the season and moved on to the state championship game for the first time in program history. They will face the winner of Wednesday’s semifinal between top seeded Oliver Ames and 12th-seeded Plymouth North on Saturday. UPDATE: The state final is set for Saturday at 5:30 p.m. at Walpole High School against Oliver Ames, which won its semifinal 2-0.

“It was crazy,” senior captain Declan Mick said, calling the night one he will never forget.

“Bedford started mounting a run late in the game as the snow started coming down, but we were able to hold off just long enough,” Mick said. “When the final whistle blew all the snow was coming down and we just started running over to the fans.”

Mick helped start the scoring for second-seeded Hopkinton in the 20th minute when his long throw-in connected with fellow senior Aryan Samaga, whose header made it 1-0 Hillers.

“I just put it right in the middle of the box. There are a lot of bodies in there and anything can happen, which is what we were looking for,” Mick said. “It really set the tone for the rest of the game. We do very well when we score first, that’s been a goal for us.”

The Hillers took the 1-0 lead into halftime.

Early in the second half, senior captain Peter DeMichele took a free kick from just inside the sideline and the ball found Sean Golembiewski, who knocked it home. Midway through the period, Bedford started getting a little chippy, and a yellow card was issued to a Buccaneers player for taking out Golembiewski’s legs away from the play, The Hillers immediately made Bedford pay, scoring on the ensuing free kick as DiMichele’s boot was deflected and stopped by the goalie, but Golembiewski pounced on the rebound and knocked it home for a 3-0 lead.

But third-seeded Bedford, which ended its season 14-3-2, did not go quietly. Spencer Goss scored in the 61st minute to cut the deficit to 3-1 and a second tally with less than 10 minutes to play made it a one-goal contest.

As the snowflakes began to fall, DiMichele buried a free kick from 30 yards out to give the Hillers a two-goal lead again. The score proved crucial as the Bucs tacked on one more of their own to account for the final margin.

The march to the state final has been nothing but nail-biters for the Hillers, who this fall captured their first Tri-Valley League title in more than a decade. Hopkinton earned a pair of 1-0 overtime victories over Fitchburg and Sharon in the first two rounds before needing penalty kicks to knock off Wayland in the round of eight.

“It’s been tough mentally and physically with all the long games, but the whole season [assistant coach Dan Collins] has been telling us about how we all have to be very gritty, we have to dig deep to win these games,” Mick said. “So far, it has worked in our favor.”

The latest gritty win has Hopkinton one victory away from a state title, a goal that is years in the making for the team’s senior class.

“I think it would mean the world to all of us,” Mick said. “The last few years I have been playin with these guys, and this is a chance to live out a dream we have had since we were 5 or 6 years old. It would be life-changing, a once-in-a-lifetime opportunity, and we are just hoping to capitalize and do whatever we can to win.”