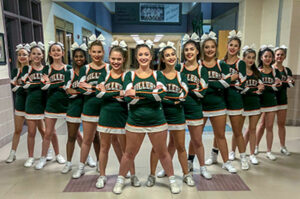 In her third season as coach of the Hopkinton High School cheerleaders, Ashley Poillucci says her team is trying tougher stunts in search of higher point totals during the competition season.

“I think the quality of the team has really improved with a lot of the girls wanting to put in more work and have the more advanced stunts,” Poillucci said. “Everyone has been working hard in practices with the goal of having elite stunts and higher scores.”

The team also has been aided by depth and balance throughout the roster. Poilluci says she has numerous athletes with the ability to land high-pressure stunts, or help with lifts, tumbling or any of the other skills needed to impress competition judges.

“Everyone has their different moments to shine,” she said. “We have had different athletes throughout the season who have been able to step up to the plate and deliver when we needed them to.”

Captains Madeline Strickland and Linnea Dean, both seniors, have helped lead the way for the Hillers this fall. The tandem is experienced in all of the different stunts and routines the team performs and has done well to provide valuable leadership on and off the mat.

Sophomores Kara Duine, Mackenzie Holmes and Elizabeth Schneider have been significant contributors to the squad, while junior Pooja Iyer also has provided a boost.

“She started out as an alternate but we have moved her onto the competition team,” Poillucci said. “She has done a really good job at picking up on everything we do.”

Hopkinton participated in the Tri-Valley League tournament on Nov. 2 and finished second. Although the Hillers did not quality for the regional tournament, taking the team to the elite competition level is a goal Poillucci has had since she became coach.

“I know Hopkinton had a couple of years struggling with changes in their coaching, so there was nothing that was really consistent about what is wanted from the team and what is expected,” she said. “Our aim is to bring our level up to that elite level of skill and have a steady, competitive program and be a good competitor.”

Hopkinton has been able to count on the support of the administration, which is understanding when the cheerleaders have to miss a football game in order to squeeze in extra practice time to hone their skills for competition.

“Competition is the reason a lot of the girls come out for the team,” Poillucci said.

Planning Board roundup: Plans discussed for...

Board of Health roundup: Noise complaints...