HHS Drama Ensemble back ‘Together Now’ 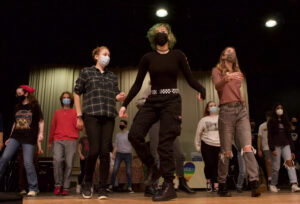 Following the lead of seniors (left to right) Annalise Curl, Caitlin Dempsey and Olivia Sward, students rehearse a song and dance number for “All Together Now!” which will be performed this weekend in the Hopkinton Middle School auditorium. PHOTO/GABRIELLE LAMBERT

“Curtain up, light the lights,” the Hopkinton High School Drama Ensemble is back offering its latest musical production, “All Together Now!” Nov. 12-14. Although the cast will not be performing “Everything’s Coming Up Roses,” the source of the quote, the actors will be performing songs from 15 Broadway musical hits. Besides being the first production of the 2021-22 school year, “All Together Now!” is the first performance by the ensemble since COVID-19 closed down the school system in 2020.

“We were in final rehearsals for “Almost, Maine” by John Cariani,” recalled Valerie von Rosenvinge, director of the Hopkinton High School Drama Ensemble, when she heard that the district might be closing school in the next few days due to the pandemic. “I told the kids that anyone in their family who wanted to see the show should come to our dress rehearsal because I was unsure if we would be able to do the full production.”

They never got that chance, since the district closed down March 10. “It was heartbreaking,” said von Rosenvinge. “Some seniors were going to tape their performances for their college applications. If I had known, I would have filmed our early rehearsals.”

She noted most students participate in the ensemble’s production all four years of high school, so losing this defining aspect of their high school experience hit them hard.

“I watched as students began the grieving process of losing the safety net they had become so dependent upon, just when it was needed the most,” said von Rosenvinge.

And while everyone soon realized that the 2020 seniors would not get to perform in the spring play, it took longer to realize that the juniors, who would graduate in 2021, would never again perform at Hopkinton High.

Although the students did not get to perform “Almost, Maine,” they took advantage of an opportunity offered by Cariani to talk with him via Zoom about their production. They described how they had changed a scene in the play, which so impressed Cariani that he mentioned it in an article done by his alma mater, Amherst College.

That was the last activity in the Drama Department until late last spring, when von Rosenvinge and Isaac Brody, the school musical director, learned that Music Theater International was offering schools and community theater groups worldwide that were impacted by the pandemic the opportunity to do “All Together Now!” free of charge if it was performed between Nov. 12 and 15. They decided it was the show for Hopkinton High since it provided many solo opportunities like “I Dreamed a Dream” (from “Les Miserables”) and “Take a Chance on Me” (“Mamma Mia”) plus ensemble numbers such as “Be Our Guest” (“Beauty and the Beast”) and “Seize the Day” (“Newsies”). The production was announced in the spring and work began over the summer.

“When I came back in the summer, it was as if time stood still,” said von Rosenvinge. “Props were still on the stage, costumes and scripts were where we left them.” But they persevered. Preparations were made, auditions were announced and about 42 students tried out. Everyone who could make the rehearsal time commitment was given a part.

“When we had our first rehearsal in early September, I was meeting the freshman and sophomore participants for the first time,” said von Rosenvinge. “The juniors and seniors, who had watched 18 months of potential theater experiences slip away, were frothing at the bit to restart their creative energy.”

With the musical now drawing near, von Rosenvinge is excited, saying, “There is a rebirth occurring right before my eyes. And after 20 months of being dark, the Hopkinton High School Drama Ensemble will be back, hopefully singing and dancing their way into the hearts of a grateful audience.”

“All Together Now!” will be performed in the Hopkinton Middle School auditorium this weekend. Friday and Saturday shows are at 7:30 p.m and the Sunday matinee is at 3 p.m. Tickets ($20 for adults, $15 for students/senior citizens) are available by visiting ShowTix4u.com/event-details/57088. Complimentary passes for Hopkinton school employees and local senior citizens along with any remaining tickets will be available at the box office prior to each performance. For more information, visit sites.google.com/a/hopkinton.k12.ma.us/hhsdramaensemble/home.