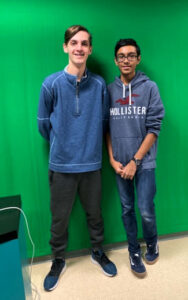 HHS juniors Pablo Diaz-Granados and Jay Katyan took third place at the MAHacks Hackathon, a coding competition where they created a prototype of a robot designed to help visually impaired individuals navigate their surroundings.

Two students at Hopkinton High School have a clear view of the future.

Juniors Pablo Diaz-Granados and Jay Katyan took third place at a coding competition in late October for creating a prototype of a robot designed to help visually impaired individuals navigate their surroundings.

The two competed in the MAHacks Hackathon, a 24-hour coding competition where teams of students come together over one weekend to develop solutions to help solve problems in their community. The students have only 24 hours to identify an issue, develop a solution, and build and code a working prototype to present to industry professionals.

“The goal was to incorporate robots to assist a realistic issue. In this case it was for people who are visually impaired,” said Diaz-Granados. “It was a good challenge because technology hasn’t been fully researched in this area. There is a lack of widespread solutions for the visually impaired in robotics.”

Katyan, who has participated in Hackathons before, said that they built on a previous idea of creating a camera that helped those with visual impairments find a seat at a public table by creating a “seeing eye robot” to help aid navigation and movement. Using ultrasonic sensors, cameras and coding, the prototype was able to steer a user away from objects, walls and other dangerous roadblocks to safely navigating a room. The robot even had a handle with breaks that could provide sensory feedback to the user.

“I have a great uncle that has visual impairment,” said Diaz-Granados. “He is older, so it is a serious concern. We tried to put ourselves in his shoes to find what would help him.”

With a strict time constraint and a small supply of materials, the students had to turn their idea into a workable model for judging.

“We had a vision, but we didn’t think we could pull it off in time,” said Diaz-Granados.

The judges were impressed by the juniors’ work and awarded them third place and a prize of a drone for each.

But it was the chance to network with some industry professionals that was the real prize, said the HHS students.

“Being able to talk to the professionals in the area and get their feedback was the best part of the experience,” Katyan said.

After the Hackathon, the prototype had to be disassembled and the parts returned, but the ideas to redesign and rebuild are already in the works for the two entrepreneurs.

“We are always looking for ideas to help those in our community,” said Dias-Granados.