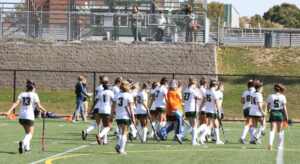 The Hillers, shown walking off the field during a break in a season-opening win over Medway, are dealing with some significant rule changes designed to minimize contact. PHOTO/JOHN CARDILLO

The motto for the Hopkinton High School field hockey team this year: Play smarter, not harder.

The ongoing pandemic has imposed changes on many high school sports this fall, but perhaps no sport has been as upended as field hockey. Not only do players have to wear face coverings, but the number of players on the field excluding the goalie has been reduced from 10 to six per side in an effort to allow athletes more room to spread out.

Adding to the challenges for the Hillers and the other teams in their local pod is that games are playing on back-to-back days, with Hopkinton meeting the same opponent on Saturday and Sunday.

“It’s been a big adjustment for the players and the coaches,” said HHS coach Becky Abate. “I have to think about how I do the lineup and substitutions so I am not burning players out. It’s not just about the first game, but giving them something left in the tank for Sunday as well.”

Playing games on consecutive days would be difficult even in a normal situation, Abate said.

“Add in the fact that we only have six field players and it has definitely taken the physical toll up about 100 percent,” she said.

An example of the difficulties of the schedule and the new rules was the first weekend of the season (Oct. 10-11) when Hopkinton played Medway. The Hillers beat the Mustangs 2-1 on Saturday but ended up on the wrong end of a 5-0 decision the following day.

“It’s really challenging to play a team Saturday and do really well and come back the very next day,” Abate said. “I don’t think Medway was a different team the second day, I think we were.”

Still, Abate feels good about the Hillers’ roster this fall. Her three captains — seniors Elizabeth Kane, Sarah Doyle and Meghan Muldoon — have been providing steady leadership since the offseason. Alyssa Sousa has looked strong at forward, Abate said, scoring in the Hillers’ season opener. Abate added that Vani Sharma has been “fantastic” so far this year.

“They all look really good on the field,” the coach said.

In goal, Hopkinton is starting freshman Caroline Kane, the younger sister of the co-captain.
“Despite the score [in the second Medway game] she has been absolutely phenomenal and shows a tremendous amount of talent and promise,” Abate said of the young keeper.
Abate said she is also pleased with the way her players have dealt with the changes so far this fall.

“They have been great about wearing the masks and they don’t complain, they don’t try to take them off, they just kind of roll with it,” she said.

As with the other fall sports teams, there will be no postseason and no competing for a league title this year. But the Hillers have a different objective for a season that comes in the backdrop of a terrible pandemic.

“The girls want to enjoy each and every day, we just don’t know how long the season is going to go so we are going to play every game as if it could be our last — because it could be,” Abate said.

“We want to be competitive, we want to win games and develop our skills, but ultimately we want to have fun,” she added. “For me, as a coach, I want the girls to have fun at field hockey. I want this to be an outlet for them.”

← Letter to the Editor: No solar in forests Daniel Laughlin, 90 →