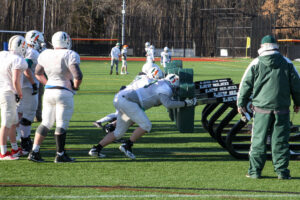 Members of the HHS football team work on blocking during a preseason practice behind the high school. PHOTO/JOHN CARDILLO

The Hopkinton High School football team will not have a sectional or state title to play for during the “Fall 2” season this spring, but the Hillers are taking on five teams from the Tri-Valley League, so a league title is on the table. And head coach Dan MacLean said that is the goal his players are focused on achieving.

“This is a different season, but the goal is to get better every day, stay healthy, and the kids want to win the league,” MacLean said. “If we win all of our league games, we could be the champ.”

The Hillers will be buoyed by senior leadership, MacLean said. That group was itching to get out on the field ever since the regular fall campaign was postponed due to the COVID-19 pandemic.

“These seniors have worked hard, they drove me crazy wanting to practice every day during this and knowing they couldn’t,” MacLean said, chuckling. “They have been waiting and they believe they have a good team going in. Now that they have this opportunity, they are taking advantage of it.”

Hopkinton’s starters built up a 20-point lead in a scrimmage against Medway on March 12 and opened the season March 20 with a hard-fought 37-27 loss at Holliston. Cole Salyards is the team’s quarterback and will see time in the defensive backfield. MacLean described the senior captain as an “exceptional” player.

The quarterback has a number of weapons around him on offense. Cam Mulvaney, another senior captain, starts at running back and plays outside linebacker on defense. Brian Keefe, Nick Leccese and Elias Pereira are receiving targets for Salyards.

“I think our speed, especially at the specialty positions, is going to be a strength,” MacLean said.

In addition to the speed, Hopkinton has a pair of sizable linemen who will anchor both sides of the line. Aidan Morin and Hayes Pearson-Woodruff will serve the dual role of protecting their quarterback while trying to get after the opposing team’s signal caller.

With the pandemic still raging, there is no question this season is different than any other. MacLean said the players have handled it well and rolled with the changes thrown their way.

“They have been great,” he said. “They know that every day something could happen and the season could be over, so they are doing everything they are asked to do. They just want to play.”

There are a number of strange aspects to this season. The locker rooms are not available due to COVID-19 protocols.

“We show up on the field and we have to spread out,” MacLean said. “It’s not like before when we would be in the locker room and then go out on the field together. We can’t do that.”

For halftime, instead of retreating to the locker room, the team will find a place outside to regroup and make adjustments for the second half. On game days, coaches will have the added responsibility of making sure the players keep their spacing on the sidelines.

By far the strangest part of the season is when it is taking place. Usually Hopkinton and other high school football teams around the state would suit up on Thanksgiving. This year, there will be a game the day before Easter.

“That’s the weirdest thing,” MacLean said. “Just knowing that it’s March and April and we are playing football. It’s weird.”

← HHS students put to the test on High School Quiz Show Select Board OK's moving Town Meeting to May 8, Town Election to May 22 →