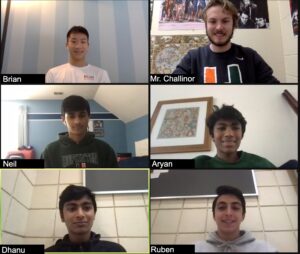 There is nothing trivial about these students’ accomplishments, even if they do involve trivia.

A five-member team from Hopkinton High School has qualified to compete in the 12th season of High School Quiz Show, a popular academic series broadcast annually by GBH2.

The new season of the show will premiere April 3 at 6 p.m. on WGBH-TV and on High School Quiz Show’s YouTube Channel. Hopkinton’s first match is set to air April 17 at 6 p.m. (it was taped March 6). A link will be sent to families and the school community to pre-record a Zoom audience to replicate the usual studio audience.

The team earned the honor of becoming one of 17 teams to participate by taking and acing the program’s first-ever virtual Super Sunday qualifying quiz Jan. 24. The Hopkinton team only had one wrong answer, said Mason Challinor, a history teacher at Hopkinton High School who works with the team as a coach/advisor.

High School Quiz Show serves “as a platform to recognize the accomplishments and knowledge of high school students across the commonwealth,” stated senior producer Phillipe Vieira. “In this difficult year, students have had to make adjustments and sacrifices in their academic, extracurricular and social lives.”

This will be Hopkinton’s first appearance on the program since 2013. The team was inactive for several years until being revived last year.

Much of the credit for the revival goes to team member Noroian. “I watched the show in the past years and found out we didn’t have one so I wanted to make one,” he said. With the support of principal Evan Bishop, Noroian submitted the forms and took the steps needed to get the team up and running.

Challinor has been working with the students to hone their skills. “I feel like the best way to get better at trivia is just to do trivia,” he said.

And so he and the team did, practicing every Friday, except for vacation weeks, since November.

Using a box of 1,000 trivia questions, he would fire questions at them on a range of subjects, giving them 15-30 seconds to answer.

The competition features questions about general pop culture and specific curriculum knowledge, which can be a challenge because the sophomores have been exposed to less academic information than their senior competitors, Challinor said.

Sometimes the student would know the answer outright. When he didn’t, Challinor would “ad lib hints on the fly” hoping that the student would “seize on one part of it” and extrapolate an answer from that information.

Taking a question and considering potential hints within the wording is something Abraham said can help find the correct answer. If questions and answers seem to reflect a common theme, then you “read more about it,” he said.

This approach “helps teach you how to approach a question,” which he said has value beyond the competition and into a classroom setting.

“At the end of the day, we’re all just ready to do our best” and “do something we enjoy,” he said.

Their success at practicing “is paying off,” Gu said. He said he looks forward to the chance to “show off all the work we’ve done.”

“I’m proud of our team,” Senthilkumaran said. He said the team will “go and do our best.”

Samaga serves as the team alternate. He is friends with the team members and “joined to help.”

“We’re going to need everything to break our way,” he said, “which it could.’’

Win or lose, this hasn’t been a trivial pursuit for these dedicated students.

“Across all of the team members there have only been one or two absences across all meetings, and they even voluntarily held a practice during February vacation,” Challinor said. “I am very proud of just how much all five of them have committed to the team.”