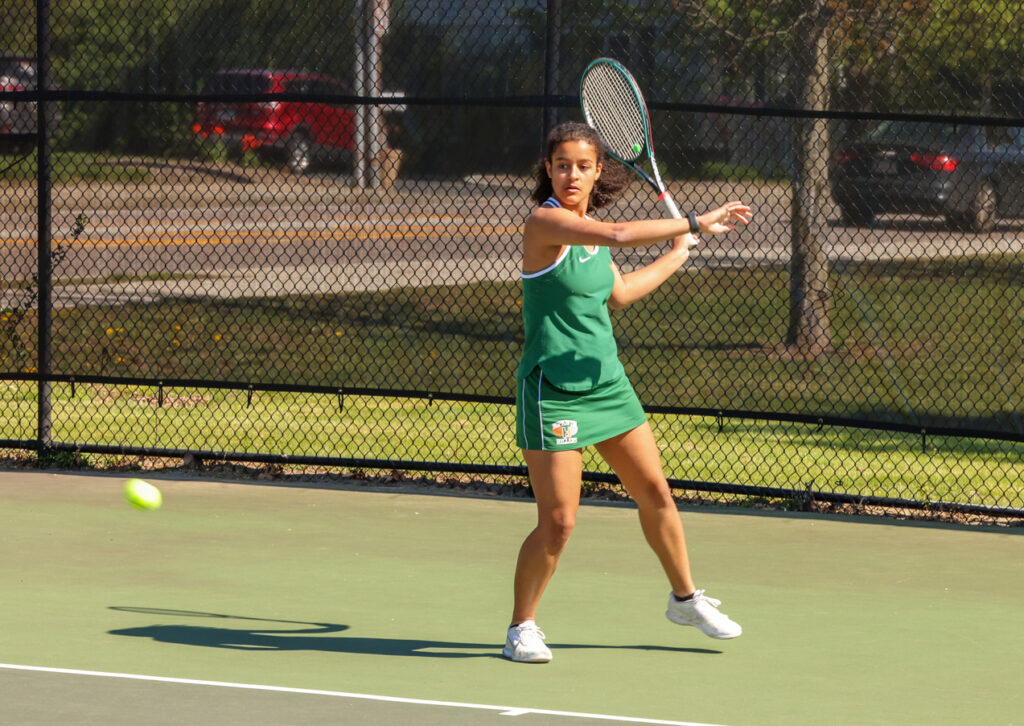 Victoria Allen prepares to return a volley during a match against Millis. PHOTO/JOHN CARDILLO

Hopkinton High School girls tennis coach Lyn Calkins thought she might be looking at a rebuilding year this spring. Instead, the Hillers will go into June’s state tournament as one of the most dominant teams in the area.

“My expectations were that we were in a rebuild,” Calkins said, pointing out that the Hillers only brought four players back from last year’s team, which advanced to the Division 1 South sectional final before falling to Wellesley.

The game-changing surprise for Hopkinton has been the addition of sophomore exchange student Paula Sendele. A native of Germany, Sendele has become the No. 1 singles player on the roster.

“I didn’t know about her until about a month before tryouts, but having her in the lineup has really allowed everyone else to move down a position, which is something I was not anticipating in the offseason,” Calkins said. “That has really helped us with our depth and allowed some of our doubles teams to develop together.”

Calkins said Sendele, who will only be at HHS this year, is an avid tennis player and horseback rider in her home country.

“There are no high school sports in Germany and she told me she wanted to get an authentic American high school athletics experience, so that’s what she is doing right now,” the coach said. “She has deep topspin from the baseline. She hits a very heavy ball and she really forces her opponents into making errors.”

Hopkinton has a young roster this spring with eight new players on varsity. Both the first and second doubles pairings are brand new. Sophomore Romy Zinman and junior Hailey Kessler have been the top doubles team, with freshman Aarushi Kamra and sophomore Evanya Mathur forming the second pairing.

The addition of Sendele has allowed seniors Riley Krattenmaker and Victoria Allen to slide into the second and third singles spots, respectively, and the results have been stellar. Both players took undefeated records into the final week of May and helped Hopkinton win 15 of its first 16 matches as a team.

Krattenmaker was unbeaten last year as well, and had not lost a singles match since her freshman year (her sophomore season was canceled due to COVID-19). The Hillers have played a normal schedule this spring, but COVID has still impacted the team. Allen had been the only player on the team to play in every match.

“She has stayed healthy and injury-free, which is truly amazing,” Calkins said.

With most other players having been sidelined at some point, sophomore Roma Tewari has stepped in to play singles at times, despite only playing competitive tennis for about a year.

“She has been a great addition,” Calkins said.

Hopkinton will compete in Division 2 this year in the new statewide format. The Hillers, like all teams, could find themselves taking on unfamiliar opponents in the tournament. But Calkins feels that her squad has the ability to advance in the postseason.

“They are hard workers, they are super competitive, and they really want to win,” she said. “I think together we can find three points [to win a match] in at least a couple of rounds.”