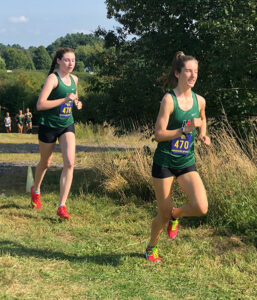 Schuyler Gooley (470) and Olivia Jones lead the way for the Hillers.

The Hopkinton girls cross country team has had a knack for exceeding preseason expectations. Two years ago, the Hillers did not show up in the preseason rankings and finished the season 13th at the all-state meet. Last year, they were ranked in the high teens for most of the year before racing to a seventh-place finish in the state.

Hopkinton began this year unranked as well but has consistently climbed, and coach Jean Cann is thinking her talented team could catch some others off guard before the fall is over.

“It’s all about getting to the all-state meet and then seeing what we can do,” Cann said. “I would like to think we can get into the top 10.”

Schuyler Gooley and Olivia Jones have the ability to lift the Hillers higher in the state rankings. The pair finished ninth and 12th in the all-state meet a season ago and have been consistently leading the pack during Hopkinton’s dual meets, all of which have resulted in Hillers victories. Cann is setting the bar high for the talented veteran runners.

“The goal for both of them is to be in the top 10 this year,” Cann said, noting Jones’ win in the divisional meet a season ago and the two strong finishes against the state’s best.

“I try to steer them away from looking at the times too much,” the coach said. It was a cold, windy day at the divisional meet last fall and the field was running on snow and ice at the all-states.

“It’s more about the effort and how they place,” Cann said. “I think the goal for them is the top 10, maybe the top five. We will see what happens.”

It will take more than two great runners for Hopkinton to be among the state’s elite. Fortunately for Cann and the Hillers, there are plenty of options. The team has 54 runners this fall, including 34 who are new to the program. The result is a different dynamic than some of the recent senior-laden squads that have been able to put together successful campaigns.

Greta Field has finished as high as third and is usually in the top five among Hopkinton runners. Katie Callery has put together some strong performances, and Hope DeLuca also is consistently among the team’s top finishers.

“Hope switched over from field hockey, she was a sprinter on the track team as a freshman and moved to the distance events last year,” Cann said. “Hope is an aggressive racer.” 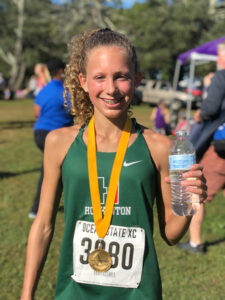 Freshman Ali Luce is one of a group of talented young runners who give the Hillers impressive depth this season.

Sophomore Lisa Levandosky has stood out this fall, and the Hillers have been buoyed by the performance of freshmen Ali Luce and Autumn Tumbleton.

“Our first meet, Ali was a little aggressive going out and she struggled a bit coming home, but Autumn is a more experienced runner and used to pacing herself,” Cann said. “They have been running together and doing really well.”

Cann was able to get a good look at her depth in a recent win over Holliston, one of the stronger teams on the Hillers’ schedule. Gooley and Jones finished first and second while Callery, Field, Luce, Tumbleton, DeLuca and Levandosky all were in the top 10 of a lopsided win.

Victories like that have Cann confident in her team’s ability going into the post-dual meet schedule.

“I am hoping we can surprise some people again and move up,” she said.