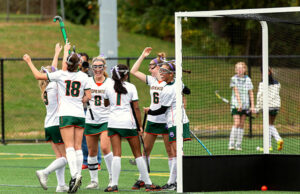 The Hillers celebrate a goal during their 2-1 victory over Medway on Oct. 8.

The Hopkinton High field hockey team has navigated a gauntlet of a road-heavy schedule and put together a first-half record that has the Hillers well within striking distance of the sectional tournament.

Hopkinton entered last week 4-4-3 on the season and looking forward to a second opportunity to beat some of the teams that it either lost to or tied the first time around.

“That’s always a goal,” said first-year varsity coach Becky Abate. “And we are still looking to the get to the tournament, that was a goal the team set for themselves. We have not won as much as I would have liked so far, but I have never seen a group of girls have more fun together, which has been very nice to see.”

Hopkinton played nine games in a row on the road due to a quirky schedule, and Abate said the constant after-school travel has been “exhausting.”

“We are looking forward to being back at home,” she said. 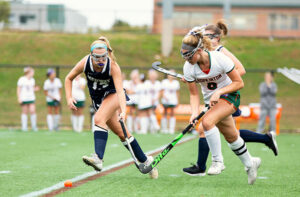 Senior captain Alyssa McIntire battles for the ball during an Oct. 8 game against Medway at the high school turf field.

The Hillers have been led by senior co-captains Alyssa McIntire and Hannah Ianelli, who have been focal points of the forward line and defense, respectively.

“They have really done a great job both on and off the field in terms of leading the team, communicating on the field, and trying to get the team psyched up when we need them to be,” Abate said. “They have been awesome captains and awesome leaders for the girls and a lot of help for me.”

Senior goalie Lizzy Gross has been consistent in net and a huge part of the Hopkinton defense, Abate said. Juniors Sarah Doyle and Sophie Driscoll, both midfielders, also have become standout players after not seeing much time during their sophomore years. Driscoll’s bounce-back also included recovering from an injury that sidelined her last fall.

Abate said she is confident the team will finish the year even stronger than it started due to the level of talent on the team. The key, she said, will be coming to play right from the first whistle.

“I think sometimes a lot of it is mental,” Abate said. “We have been working on getting our intensity up not just physically but mentally. I think sometimes we play well when we are down, but we need to play that way from the start.”

The coach, who took over the program after eight years with the JV squad, said she was impressed by her team’s performance in a recent loss to Westwood because she was able to see the intensity and mental toughness on display even in defeat.

“We went into the game amped up and really excited and we kept that excitement level the whole way through, even though we didn’t win,” Abate said. “That was a nice improvement for us.”